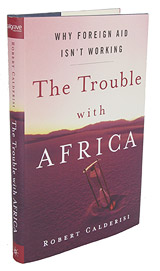 As Robert Calderisi makes clear in "The Trouble With Africa," foreign aid is usually mismanaged, wasted or simply diverted to various precincts of the continent’s busy kleptocracies, subverting the evolution of normal markets.

Africa is by no means the only region in the world where corruption seems endemic.  Paul Wolfowitz, the head of the World Bank, addressed the problem of corruption on a trip to Indonesia earlier this year.  Even building a new baseball stadium in the Bronx can involve community-outreach efforts that might better be called payoffs.  But Africa seems to find it especially difficult to set up a legal system that can enforce contracts and compel transparency.

Mr. Calderisi says more explicitly than anyone — except perhaps George B.N. Ayittey and the late British economist P.T. Bauer — that foreign aid is almost always harmful to the African counties that receive it.  The fault, he notes, is not in the stars but in the behavior of Africans themselves, especially the leaders who have pocketed so much of the money intended for their citizens.

The full reference to the Calderisi book is: