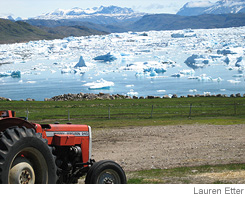 A potato farm in Greenland has been able to expand as more land is arable due to higher temperatures.  Source of image:  the online version of the WSJ article quoted and cited below.

(p. A1)  QAQORTOQ, Greenland — Stefan Magnusson lives at the foot of a giant, melting glacier.  Some think he’s living on the brink of a cataclysm.  He believes he’s on the cusp of creation.

The 49-year-old reindeer rancher says a warming trend in Greenland over the past decade has caused the glacier on his farm to retreat 300 feet, revealing land that hasn’t seen the light of day for hundreds of years, if not more.  Where ice once gripped the earth, he says, his reindeer now graze on wild thyme amid the purple blooms of Niviarsiaq flowers.

The melting glacier near Mr. Magnusson’s home is pouring more water into the river, which he hopes soon to harness for hydroelectricity.

"We are seeing genesis by the edge of the glacier," he says.

Average temperatures in Greenland have risen by 2.7 degrees Fahrenheit over the past 30 years — more than double the global average, according to the Danish Meteorological Institute.  By the end of the century, the institute projects, temperatures could rise another 14 degrees.

The milder weather is promoting new life on the fringes of this barren, arctic land.  Swans have been spotted recently for the first time, ducks aren’t flying south for the winter anymore and poplar trees have suddenly begun flowering.

(p. A12)  For Greenlanders, adapting to the effects of climate change is nothing new.  Oxygen isotope samples taken from Greenland’s ice core reveal that temperatures around 1100, during the height of the Norse farming colonies, were similar to those prevailing today.  The higher temperatures were part of a warming trend that lasted until the 14th century.

Near the end of the 14th century, the Norse vanished from Greenland.  While researchers don’t know for sure, many believe an increasingly cold climate made eking out a living here all but impossible as grasses and trees declined.  Farming faded away from the 17th century to the 19th century, a period known as the Little Ice Age.  Farming didn’t return to Greenland in force until the early 1900s, when Inuit farmers began re-learning Norse techniques and applying them to modern conditions.  A sharp cooling trend from around 1950 to 1975 stalled the agricultural expansion.

Since then, temperatures have mainly been on the upswing.  Ole Egede is taking advantage of the warmer climate.  He and his brother live on Greenland’s southwest coast on an isolated farm at the head of an inlet that can be reached only by helicopter or by a boat that can navigate around the icebergs that often choke the blue fiord.  Mr. Egede started Greenland’s first commercial potato farm in 1999 and it remains the largest potato farm in Greenland.

Improved farming technology and methods, such as new cold-resistant seed varieties and cultivation techniques — are responsible for some of Greenland’s expanding agriculture.  But experts credit the more-favorable climate with much of the new growth.  "There’s no doubt he’s now growing potatoes because of better conditions," Mr. Hoegh, the farming consultant, says of Mr. Egede.

LAUREN ETTER.  "Feeling the Heat For Icy Greenland, Global Warming Has a Bright Side As Temperatures Inch Up, Melting Glaciers Bring New Life to a Frozen Land But Could Polar Bears Vanish?"   The Wall Street Journal  (Tues., July 18, 2006):  A1 & A12.

Source of map:  the online version of the WSJ article quoted and cited above.