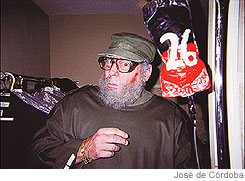 (p. A1)  Mr. Calderón says the work can be risky.  Once, he recalls, a woman whose relative had been executed by the revolution hurled a dinner plate at his head.  At a recent gig, a tiny, white-haired lady shouted at him:  "Why did you ruin the country?" Mr. Calderón, as Fidel, answered that she should thank him because if it hadn’t been for him, she’d be stuck in Cuba instead of living well in Miami, "where you can buy hair dye and dentures."

After the Aug. 13 performance, a ballroom attendant, Armando Montes de Oca, approached Mr. Calderón while he was still in his Castro beard and told him:  "If I didn’t know you were Calderón behind that beard, you would never leave (p. A9) this room alive."

Mr. Calderón has been doing his imitation of Fidel for about a dozen years.  He became a local superstar two years ago when a cable-TV channel started weekly broadcasts of a skit called "La Mesa Retonta," or "The Idiots’ Table," a takeoff on a weekly "Meet the Press"-style show Mr. Castro has done in Cuba, called "La Mesa Redonda," or "The Roundtable."

Mr. Calderón’s Fidel voice is so good that on about 50 occasions, he has telephoned Cuban bureaucrats in Havana or Cuban diplomats abroad and fooled them into thinking they were on the line with the man himself.  Mr. Calderón taped the calls, which he still often plays on a Miami radio show.

Two years ago, Mr. Calderón held a 12-minute conversation with Cuba’s deputy construction minister, ordering him to build a giant retractable roof over Havana’s Latin American stadium, as a way to improve conditions for Cuban baseball players and dissuade them from defecting.

"We need a revolutionary roof to uphold the pride of the Cuban Revolution," said Mr. Calderón during the taped telephone call, in a dead-on imitation of Mr. Castro’s edgy, high-pitched, nasal voice.

"I am your unconditional soldier," replied the hapless minister, who promised to get the job done.

That same year, Mr. Calderón telephoned a luxury hotel at Cuba’s Varadero beach resort and ordered the hotel manager to provide a week-long all-expense-paid vacation for one of Cuba’s leading dissidents, whose movements are shadowed by the secret police, to show the government’s good will.  Before hanging up, the hotel manager, Mr. Calderón says, promised to make the reservation.

A year earlier, Mr. Calderón as Fidel told transport official Gumersindo Gómez to round up 200 scarce buses for an outing of some 700 priests of the Afro-Cuban religion Santería, and to find room for their sacrificial goats and chickens.  Make sure the buses don’t have any graffiti saying "down with You-Know-Who," he added.

"Onwards to victory," replied Mr. Gómez, according to the tape of the phone call.