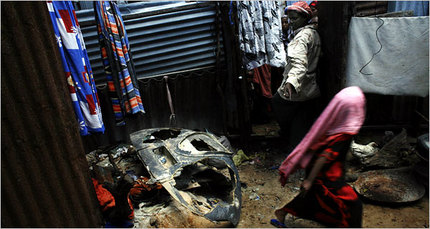 In Mogadishu the nose of one of the two Black Hawk helicopters that were were shot down in 1993.  Source of the photo:  online version of the NYT article cited below.

MOGADISHU, Somalia, Sept. 23 — They call her the “Black Hawk Down” lady.

And in the corner of her dirt yard, beneath rags drying in the sun and next to a bowl of filthy wash water, she keeps a chunk of history that most Americans would probably like to forget.

It is the battered nose of a Black Hawk helicopter, from one of the two that got shot down in Mogadishu on Oct. 3, 1993, in an infamous battle that killed 18 Americans, led to a major foreign policy shift and spawned a big movie.

The Black Hawk Down lady stands fiercely at her gate and charges admission to see it.

Ecstatic Somalis ransacked the wreckage, stripping the helicopters and melting down the metal. Some people even ripped insignia patches off the bodies of the soldiers to keep as grim souvenirs.

But Ms. Elmi had a different plan.  Her husband had died a long time ago, and she had six children to feed.  Two of her older sons were killed, she said, when the helicopter crashed.  She dragged the cracked nose piece, about five feet across but actually pretty light because it was made of fiberglass, back to her house.

Ms. Elmi began humbly, charging neighborhood boys the equivalent of a few cents to get a peek at her one exhibit, the last known chunk of wreckage from what Somalis refer to as Ma-alinti Rangers, the Day of the Rangers.

But after the movie “Black Hawk Down” came out in 2001 — and pirated copies found their way to Mogadishu — business boomed.

When asked why they come, she snapped:  “How should I know?  Do you think I am mind reader?”

The entrance fee is now around $3 for foreigners; locals get a discount and pay 75 cents.

Some people say they fear the Islamists will impose a draconian version of Islam in Somalia, which up until recently had been relatively secular.

But Ms. Elmi said she loved the Islamists.  And she has her own reasons.

“They bring peace,” she said.  “And peace brings tourists.”

(Note:  in the print version, but not the online version, there is a subheader placed in the center of the article that reads:  "An entrepreneur feeds a family, thanks to the remnants of a battle.")