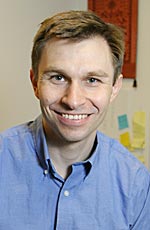 If our institutions sufficiently allow and reward entrepreneurial innovation in health care, substantial gains in the length and quality of life are possible.  (In the WSJ article passages that follow, "CR" stands for "calorie restriction.")

(p. A1)  Now a coterie of scientists and biotech ventures are rekindling interest in CR as they try to mimic its antiaging effects with medicines.  It is still a highly speculative quest, and many researchers fret that it hasn’t completely shaken its association with centuries of dubious nostrums to slow aging, from inhaling virgins’ breath to eating gold to implanting monkey glands.

Much of the new focus is on a substance in red wine called resveratrol.  The interest in it started three years ago when a group led by Harvard Medical School biologist David Sinclair reported that it boosted yeast cells’ life span by 70% via a mechanism resembling CR.  He later co-authored a study showing that it also boosts life span in fruit flies and roundworms.  But his tendency to make bold leaps based on tentative data has also sparked intense controversy.  One big question:  Does he really understand the workings of CR well enough to mimic them in a drug?

Last spring, Italian scientists reported that resveratrol boosted life span more than 50% in a kind of short-lived fish.  Intriguingly, fish on resveratrol had much faster swimming speeds as they aged, and spent far more time moving around, than did undosed control fish.

At least two groups of researchers are now testing whether resveratrol can extend life span in mice — the first such studies in mammals.  At a meeting of the American Aging Association in June, Dr. Sinclair and colleagues presented preliminary results from a study showing that resveratrol had "CR-like protective effects" against the buildup of fatty deposits in the livers of mice on high-calorie diets.  That suggests that resveratrol could lead to new drugs for diseases of aging associated with rich diets, such as adult-onset diabetes.

A company that Dr. Sinclair co-founded in 2004, Sirtris Pharmaceuticals Inc., of Cambridge, Mass., has begun testing a resveratrol-based drug in diabetic patients.  It has raised $82 million from venture capitalists, a hefty sum for an early-stage biotech.  . . .

(p. A11)  Dr. Guarente recalls that Dr. Sinclair, who came to MIT in 1995 to do post-doctoral studies, breezed into his lab as if out of a Crocodile Dundee movie, greeting everyone with a cheery, "Hello, mate."  The eldest son of parents who both worked in medical diagnostics, he was known in high school as a talented class clown and risk-taker, a kid who aced science classes but got in trouble for setting off minor explosions in chemistry lab.  The idea of taking part in unorthodox, high-risk studies on aging suited him.

. . . , Dr. Sinclair joined forces with a researcher at the National Institute on Aging, Rafael de Cabo, to plan one of the ongoing studies of resveratrol in mice.  But he had a problem:  He lacked the $20,000 needed to buy mice.  Then he got a call out of the blue from Tom LoGiudice, foreman at the U4EA ("euphoria") Ranch near Thousand Oaks, Calif. Mr. LoGiudice had phoned on behalf of the ranch’s owner, Harman Rasnow, who was considering taking resveratrol pills and wanted to know more about them.  When Mr. LoGiudice heard about Dr. Sinclair’s problem, he arranged for his boss to talk directly to the researcher.  "I have an 85-year-old passion for longevity," says Mr. Rasnow, pinpointing his age.  "David sounded like he was really onto something.  So I told him, ‘I’ll send you a check for $20,000.’ "

Dr. Sinclair later got another call from Mr. LoGiudice, this time inviting him to make a pitch for funding to one of Mr. Rasnow’s wealthy acquaintances, Paul Glenn, a venture capitalist and a longtime supporter of research on aging.  After Dr. Sinclair did so, the Glenn Foundation for Medical Research in Santa Barbara, Calif., awarded $5 million to Harvard Medical School to launch a center on the basic mechanisms of aging with Dr. Sinclair as its founding director.  Now plans are afoot to expand the center into a leading institute on aging, says Mr. Glenn, with start-up funding of $75 million to $100 million.