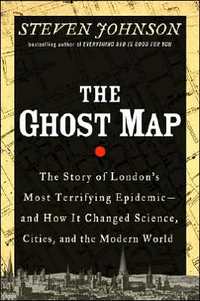 I have not yet read The Ghost Map, but from the review excerpted below, it sounds like a wonderful book.  One lesson from the book appears to be that much good can come from a careful collection of evidence, and that much harm can come from sticking to a theory in spite of the evidence.  It is also interesting that in this tale, the villain turns out to be the advocate of public works, whose good intentions resulted in much death and suffering.

(p. P8) The sociology of error is a wonderful subject. Some university ought to endow a chair in it — and then make Steven Johnson the first professor. Mr. Johnson last provoked the public with his counterintuitive polemic "Everything Bad Is Good For You," in which he argued that TV and videogames actually improve our cognitive skills. In "The Ghost Map" he tells the story of how for 30 years and more the medical establishment in Victorian London refused to accept what was staring them in the face, namely that cholera was a waterborne disease.

Thousands of Londoners died while doctors and public-health officials stubbornly clung to the view that the plague was an airborne miasma that hung in the foul atmosphere of the slums and was inhaled by the wretched creatures who lived there. Every kind of cure was proposed: opium, linseed oil and hot compresses, smoke, castor oil, brandy — everything but the simple, obvious remedy of rehydration, which reduces the otherwise fatal disease to a bad case of diarrhea.

The fact that the cholera toxin tricks the cells in the lining of the colon into expelling water at a terrifying rate (victims have been known to lose 30% of their body weight in a matter of hours) should surely have alerted someone to the possibility that putting this Niagara back into the body might be worth trying. Only one doctor, Thomas Latta, hit upon the answer, in 1832, just a few months after the first outbreak ever in Britain. His mistake was not to inject enough salty water, and his lone initiative was soon overwhelmed by the brainless babble of the quacks.

Chief among the villains of Mr. Johnson’s unputdownable tale was the man whom we were brought up to revere as the father of public sanitation, Edwin Chadwick. This dour, tactless, unpopular reformer laid the foundations for all the government interventions in public health that we now take for granted. Yet in this story he labored under not one but two illusions that proved catastrophic.

With the austere teetotaller and vegetarian Dr. Snow and his devoted helper in the Soho slums, the Rev. Henry Whitehead, "The Ghost Map" gains not one but two heroes. Patiently they mapped the patterns of victims and survivors and narrowed down the most likely source of the cholera plague to the Broad Street pump. But even after the pump handle was removed so that Londoners could no longer fill their buckets there and the illness subsided, the miasmatists were not convinced. Snow then tramped the streets of Battersea and Vauxhall to demonstrate that those who had their water from higher up the Thames, above the reach of the tide, remained unharmed, while those who took it from the foul tidewater perished in the hundreds. This was no easy task, since the pattern of water pipes under London’s houses was as tangled as the pattern of Internet service providers are today.

Why did it take so long? Because mapping epidemics was only in its infancy, though Snow’s famous map was not quite the first. Because the questions that Chadwick’s public-health board researched were self-fulfilling, all having to do with the smells and personal habits of the poor and not with the water they drank. The researchers mistook correlation for causation: Nobody died on the high ground of Hampstead, where the air was purer, therefore higher was safer — or so it seemed until a Mrs. Eley, who had retired thither, arranged to receive a jugful of water from her beloved Broad Street pump and got cholera.

But above all Chadwick and his crew were certain of themselves because the stench of the slums was so utterly disgusting and because smell acts so powerfully on our imaginations. Only the most careful and dispassionate investigators were free of the obsession with stench. Henry Mayhew, for example, noted in his "London Labour and the London Poor" (1851) that sewer-hunters, who scavenged deep underground knee-deep in muck, lived to a ripe old age. The Great Stink of 1858, which finally persuaded the government to commission Sir Joseph Bazalgette to lay down the magnificent network of sewers that have lasted to this day, did not kill a single Londoner — yet still Chadwick did not believe.

FERDINAND MOUNT.  "BOOKS; Lost in a Time of Cholera; How a doctor’s search solved the mystery of an epidemic in Victorian London."  The Wall Street Journal   (Sat., October 21, 2006):  P8.

The reference to the book is:

Johnson, Steven. The Ghost Map: The Story of London’s Most Terrifying Epidemic – and How It Changed Science, Cities, and the Modern World. New York: Riverhead Books, 2006.  299 pages, $26.95 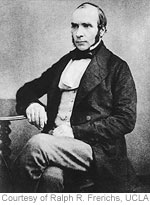 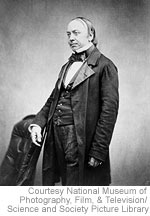 Edwin Chadwick.  Source of photo:  online version of the WSJ article cited above.