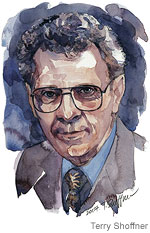 Bob Chitester.  Source of image:  online version of the WSJ article cited below.

I was in the audience for the discussion portion of a couple of the episodes of the original "Free to Choose."  On January 29, PBS broadcast a sort of coda to the series entitled "The Power of Choice:  The Life and Times of Milton Friedman."

As much as the show is a celebration of Friedman’s life and work, it also showcases the remarkable entrepreneur who made it and "Free to Choose" possible. Bob Chitester produced the original series while serving as the only public-TV station manager in the country who didn’t believe in government subsidies. A tireless promoter, he raised the equivalent of $8 million today for the series — entirely from private sources, an achievement that delighted Friedman.

Mr. Chitester came to the project with an unusual background. In 1966, he became the general manager of the PBS station in Erie, Pa., at age 29. An opponent of the Vietnam War, he handed out literature for George McGovern in 1972 and admits he knew nothing about economics. Then, in 1976, he met with economist W. Allen Wallis, who gave him a copy of Friedman’s "Capitalism and Freedom." Mr. Chitester soaked it up, became a believer in markets, and immediately began pursuing Friedman to do a series that would provide a counterpoint to one by liberal economist John Kenneth Galbraith that PBS was airing.

After all these years, Mr. Chitester is still surprised by how easily Friedman’s cooperation came. "I was a bearded, leather-jacketed, small-town TV executive, yet he treated me as competent and honorable, as he did everyone he met, until you proved otherwise," he recalls.

Surprisingly, Friedman insisted on not writing a script in advance of filming. The points that would be made in each scene were discussed, but his commentary was extemporaneous. This resulted in such gems as the economist sitting in a sweatshop in New York’s Chinatown, where he recalled the days when his mother worked in a similar environment. "Life was hard," Friedman noted, "but opportunity was real." He then transports the audience to a junk floating in the harbor of Hong Kong, "the freest market in the world," where Friedman discusses how the then-British colony’s leaders refused to collect some economic statistics because they feared they would be used as an excuse for government intervention in the booming economy.

This week’s PBS special pays tribute to the many achievements of Milton Friedman. One that is often underappreciated is the extent to which he demonstrated how visual images could influence and shape public debate. As his most ardent electronic disciple, Bob Chitester deserves the free-market community’s equivalent of an Oscar.