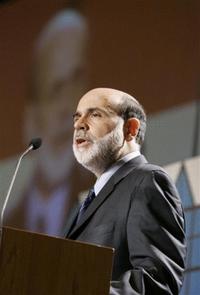 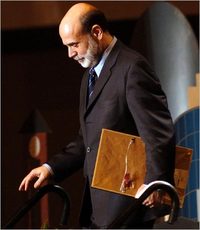 Bernanke in Omaha addressing the Chamber of Commerce (left) and after receiving a plaque officially appointing him as an "admiral" of the Nebraska Navy (right, ha, ha).  Source of the left photo:   http://www.omaha.com/neo-images/photos/large/ap-nenh10102061909.jpg   Source of the right photo:  online version of the NYT article cited below.

Last week, on 2/6/07, I attended a large Chamber of Commerce luncheon at which Federal Reserve Chair Ben Bernanke was the featured speaker.  The talk was subtle and restrained, but interesting.  Apparently it was one of the first speeches by Bernanke, since becoming chair, to address an economic issue broader than the macro policy issues that the fed usually addresses.  The headlines in the Omaha World-Herald and the Wall Street Journal missed the main point, I think.

The main point was not to criticize the inequality of the United States economy, but to praise its dynamism.  He pointed out the extent to which living standards have improved as a result of that dynamism.  And he wanted mainly to suggest that when we adopt policies aimed at reducing inequality, we be careful to be sure that the policies do not have the unintended consequence of reducing the dynamism.

For the full NYT article, see:

For the full WSJ article, see:

(Note:  the online version of the article had the slightly different title "Growing income gap poses problems, Fed chief says" and is dated 2/6/07.  The article may have first appeared in the paper’s evening edition on 2/6/07.  My copy was the morning edition of 2/7/07.)

For the text of Bernanke’s "The Level and Distrubution of Economic Well-Being" presentation, see:  http://www.federalreserve.gov/boarddocs/Speeches/2007/20070206/default.htm