A few years ago, eBay created a wonderful ad in which a young boy is at the beach playing with his toy boat.  His mother tells him that it’s time to go; he leaves the beach forgetting his boat; the boat washes out to sea and sinks in a huge storm.  A fisherman hauls up the boat in his fishing net.  He brushes it off and puts it up for sale on eBay.  The next scene is of a 20-something young man looking stunned at a computer screen, with a picture in the background of himself as a boy with the toy boat.  On his PC screen is the eBay page with the boat for sale.

The point is how wonderful free markets can be when they help consumers find and obtain what consumers desperately want.

Of course this is just an ad.  But it rings true.  See the story excerpted below:

My husband, for example, still hankers for a certain flying toy he played with as a child.

For years, I have heard stories about this lost talisman of youth, an almost mythical toy that had an inflated balloon that could be launched into the air and propelled through a room by a whirring fan.

But my husband could never remember its name — until the other day.

“I FOUND IT! I FINALLY FOUND IT!” he wrote in an instant message that popped up on my computer.

Johnny Astro. With a name like that, a name that evokes rocket ships, moon walks and the glory of the technological future hurtling our way, you can see why such a toy would linger in the memory of a boy who grew up in the 1960s.

How could I refuse?

I turned to eBay. A set was for sale with seven bidders so far, with a high bid of $76. An hour before the auction closed, I placed a bid authorizing eBay to go as high as $207 on my behalf. (I calculated I would get the set for a much lower price, however, given Ms. Grant’s price range.)

“You paid how much?” he asked.

“You said you wanted it for your birthday,” I said.

He thought about it for a minute.

“If I got two,” he said, “we could fly them together and exchange balloons in the air.”

The link for the Toy Boat ad is:  http://www.thepowerofallofus.com/flash.html   (click "TV Spots" and then "Toy Boat") 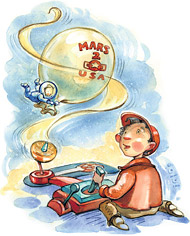 Drawing of Johnny Astro toy.  Source of drawing:  online version of the NYT article cited above.