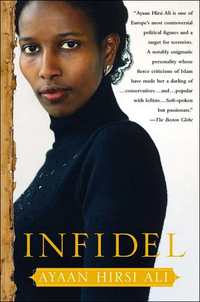 Two key moments in Ms. Hirsi Ali’s life stand out. One is her arrival in the West, a moment she considers to be her "real birthday." On the day her husband shows up at the refugee camp in Holland to claim his rights, Ms. Hirsi Ali finds that she can say "no" to a man stronger than she is, thanks to the protection of a democratic state, a protection made visible, in this case, by the presence of Dutch policemen. She thus experienced an imperative that to most of us is a mere abstraction: Individual freedom needs the rule of law.

The second pivotal moment in her life, Ms. Hirsi Ali says, was the 9/11 terrorist attack on the U.S. She understood what drove Mohamed Atta and his co-hijackers; she once shared their values and had known people like them in the Muslim Brotherhood. "Every devout Muslim who aspired to practice genuine Islam," she writes, "even if they didn’t actively support the attacks, they must have at least approved of them." With 9/11, Ms. Hirsi Ali’s religious doubts erupted into defiance of what she had known while growing up.

From that day onward, Ms. Hirsi Ali became a public voice in the Dutch post-9/11 debates. Eloquently, she made bruising, sometimes inflammatory, arguments. Islam was backward, she said, and needed its Voltaire. She declared that, considered by modern standards, the Prophet was a "pervert" because he had married a 9-year-old girl. Elected an MP for the market-oriented VVD Party in 2003, she became a politician in the grand, passionate style, breaking with Dutch habits of consensus and accommodation.

A nation of 16 million people, with a Muslim minority of about one million (mostly Moroccan and Turkish immigrants), the Netherlands was at the time (and is still) trapped by its carefully nurtured sense of tolerance and hospitality. The trouble was that its newcomers did not necessarily embrace tolerance, women’s rights, free speech and other core Dutch values. Ms. Hirsi Ali knew that she was courting danger by openly addressing such concerns. Nonetheless, she pushed ahead and began working with director Theo van Gogh on "Submission," the film about the mistreatment of Muslim women. When van Gogh was murdered on Nov. 2, 2004, the police found a knife stuck in his body — the weapon was holding in place a letter threatening Ms. Hirsi Ali.