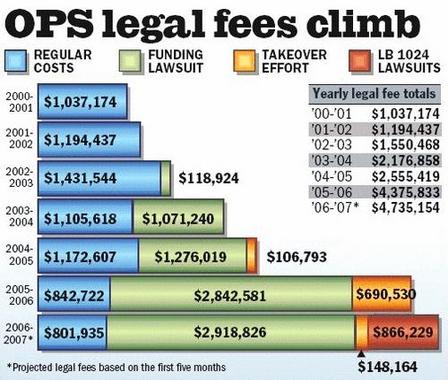 Source of graphic:  online version of the Omaha World-Herald article cited below.

(p. 1A)  Who’s winning in the Omaha-area disputes about school finances and boundaries?.

Taxpayers have shelled out $12 million to private lawyers hired to handle those matters for Omaha-area school districts and the State of Nebraska, a World-Herald study found.

Nearly all of that has been paid during the past 31/2 years to two Omaha firms: Baird Holm, hired by the Omaha Public Schools, and Fraser Stryker, which was hired by the state and separately by the suburban districts.

The money has been spent on three interconnected items:

• The OPS lawsuit against the state’s school funding system, which accounts for most of the $12 million.

• The Omaha district’s effort, now on hold, to take over its suburban neighbors.

• And fallout from the Legislature’s 2006 law that would break apart OPS and create a two-county "learning community" for the Omaha metro area.

The $12 million doesn’t include lobbying costs or staff time for the three matters. And it doesn’t include millions of dollars the districts paid lawyers during the same period for routine legal work.

The three items have fueled a stunning increase in OPS payments to lawyers. The district now pays about $400,000 a month in legal fees – four times what it (p. 2A) paid five years ago.

"This seems to me to be crazy," said State Sen. Ron Raikes of Lincoln, who introduced a bill this year aimed at curbing school districts’ spending on legal fees.

"These are legal fees, paid pretty much by taxpayers, for a school district to conduct a legal war against another school district or against the state," said Raikes, who heads the Legislature’s education committee.