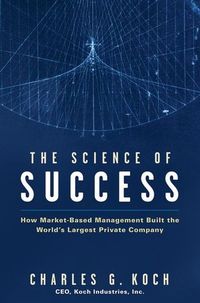 When Charles Koch became the chief executive of Rock Island Oil & Refining after the death of his father in 1967, the company was a moderately successful enterprise based in Wichita, Kan. He renamed it Koch Industries in honor of his father — and over the next 40 years proceeded to transform Fred Koch’s legacy into the world’s largest private company. Koch Industries — now a commodity and financial conglomerate that includes brands such as Stainmaster, Lycra and Dixie cups — has 80,000 employees in 60 countries. Its revenue last year was $90 billion. In one generation, the book value of Koch Industries has increased 2,000-fold. That’s an 18% compounded annual return — comparable with the long-term track record of Warren Buffett’s Berkshire Hathaway.

At age 71, Mr. Koch clearly feels that the time has come to pass along the business formula that has served him so well. In "The Science of Success," he describes a technique, called Market-Based Management (MBM), that he says evolved from his reading, early in his career, in history, political science, economics and other disciplines. He arrived at an understanding of what allows a free society to prosper, Mr. Koch says, and decided to apply those principles to business.

. . .   He is especially fond of the "Austrian school" of economists, such as Ludwig von Mises and Joseph Schumpeter, who emphasized production processes, technology and the dynamic competitive models of "creative destruction."