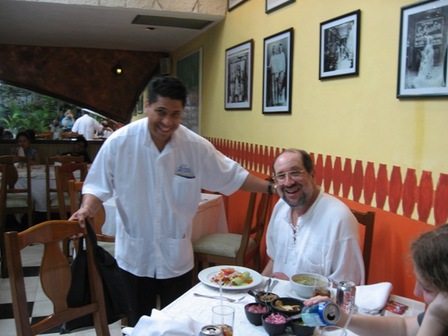 Gerardo on the left; me in the middle; and Jenny in the right lower corner.  Photo by Jeanette (who you can just barely see in the mirror over Gerardo’s shoulder).

In downtown Cancun we dined at a wonderful restaurant called Labná.  The food was authentic, varied, and delicious.  The service, from Gerardo (above) was attentive and replete with gracious good-will.

The restaurant itself was an oasis of order in a milieu of disorder and decay.

As one tours Mexico, one has the sense of an enormous waste of human time and talent.  The incentive to act and the ability to get things done, is sucked away by an enormous cadre of parasitical rent-seeking hangers-on, who are either part of the government or who are privileged by government rules and regulations.

When the roof of our home in Nebraska was damaged by hail several years ago, it was replaced by a crew of Mexican workers.

Our retired neighbor Howard had the habit of carefully monitoring all of our outdoor contractors.  Old, reliable, helpful, curmudgeony Howard (may he rest in peace) was much more likely to offer complaint than praise.  But Howard told me, with genuine respect and admiration in his voice, how impressed he was with how hard the Mexican crew had worked, especially through the oppressive heat of the summer days.

In most areas of government activity, the Mexicans would benefit from a lot more of what Edmund Burke called "salutary neglect."

(Note:  Leonard Liggio reminded me of the wonderful phrase "salutary neglect" at the April 2007 meetings of the Association of Private Enterprise Education in Cancun.)

(Another note: The address of the Labná restaurant is Margaritas 29.  It is near a run-down park, where I purchased an OK cup of flan from a vendor for 10 pesos–the best flan I ever had for less than a dollar!)