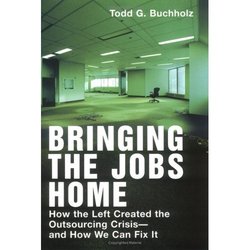 I saw Todd Buchholz on C-Span and on CNBC, and I enjoyed hearing his views, so I decided to buy his Bringing the Jobs Home.  I don’t like the title, because it sort of implies that the job market is a zero-sum-game, in which one country’s gain implies another country’s loss.  Us true-blue free marketers believe that the market is a non-zero-sum game in which everyone everywhere can have jobs, and have better ones over time.

But Buchholz’s little book is fun to read, and says much that is plausible about how the government hurts the worker and reduces the efficiency of the labor market.

Read the following excerpt for part of his rousing conclusion to the book.

(And, Aaron, I agree with you that Buchholz is wrong to say the American spirit is "innate.")

(p. 177)  . . . :  Since the 1960s, each year we’ve lost a little nerve, gained another bureaucrat, another lawyer, another layer of protection against life’s uncertainties.  We have gotten used to a government that aims to coddle us but ends up both preventing us from growing and dampening the innate American spirit.  The spirit still stirs but gets buried under the weight of the nanny state.

(p. 178)  American government officials today cannot put our standard of living in a lockbox to preserve, protect and defend us.  Franklin D. Roosevelt warned us of fearing fear itself; now we fear life itself.

(p. 179)  To paraphrase Churchill, Americans did not sail the perilous Atlantic, scale the Appalachians and struggle past the Rockies because we were made of cotton candy.

Buchholz, Todd G. Bringing the Jobs Home: How the Left Created the Outsourcing Crisis–and How We Can Fix It. New York: Sentinel, 2004.

2 thoughts on ““Roosevelt Warned us of Fearing Fear Itself; Now We Fear Life Itself””