Supporters of freedom in Venezuela protesting communist dictator Chavez’s shutting down the television network that dared to criticize him.  Source of photo:  online version of the NYT article that is quoted and cited below.

My Wabash College economics professor, Ben Rogge, used to say that political freedom ultimately depended on economic freedom:  how could you depend on a socialist government to provide a printing press to those who seek to undermine socialism?

(In his article "The Case for Economic Freedom" published in his Can Capitalism Survive? Rogge gives credit for the argument to his friend Milton Friedman in his Capitalism and Freedom, which was based on lectures given at Wabash.)

Well, if there is a heaven, I can imagine Rogge there, reading the following passages, and reacting with his sad, knowing, half-smile.

(p. A3)  CARACAS, Venezuela, May 27 — With little more than an hour to go late Sunday until this country’s oldest television network was to be taken off the air after 53 years of broadcasting, the police dispersed thousands of protesters by firing tear gas into demonstrations against the measure.

The president has defended the RCTV decision, saying that the network supported a coup that briefly removed him from office in 2002.

Mr. Chávez has left untouched the operations of other private broadcasters who were also critical of him at the time of the 2002 coup but who have changed editorial policies to stop criticizing his government. That has led Mr. Chávez’s critics to claim that the move to allow RCTV’s license to expire amounts to a stifling of dissent in the news media.

“The other channels don’t say anything,” said Elisa Parejo, 69, an actress who was one of RCTV’s first soap opera stars. “What we’re living in Venezuela is a monstrosity,” she said at RCTV’s headquarters on Sunday, as employees gathered for an on-air remembrance of the network’s history. “It is a dictatorship.”

(Note: the excerpts above are from the updated online version of the article that appeared online under the title: "Venezuela Police Repel Protests Over TV Network’s Closing.")

On 5/28/07 CNN broadcast a Harris Whitbeck report on students protesting the Chavez censorship under the title "Hear No Evil, See No Evil." 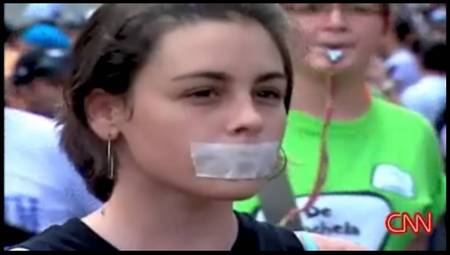 Monica Herrero protests Chavez closing down the television network that dared to criticize his government.  Source of photo:  screen capture from the CNN report at http://www.cnn.com/video/partners/clickability/index.html?url=/video/world/2007/05/28/whitbeck.chavez.tv.affl