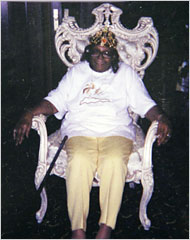 "The victim, Kathryn Johnson, was described as either 88 or 92."  Source of caption and photo:  online version of the NYT article cited below.

In my 11/23/06 blog entry on Kathryn Johnston’s death at the hands of the Atlanta police, I thought that she was an innocent by-stander in a legal drug bust (though I criticized the drug laws).  But it turns out that the situation was even worse than I thought.

In the article excerpted below, it appears that the police lied to get a no-knock warrant, and when no drugs were found anywhere in the home, they planted marijuana that they had obtained from a previous drug bust.

(One more bit of evidence that Milton Friedman was right that we need a serious policy discussion on the economics and ethics of the War on Drugs.)

ATLANTA, April 26 — After the fatal police shooting of an elderly woman in a botched drug raid, the United States attorney here said Thursday that prosecutors were investigating a “culture of misconduct” in the Atlanta Police Department.

In court documents, prosecutors said Atlanta police officers regularly lied to obtain search warrants and fabricated documentation of drug purchases, as they had when they raided the home of the woman, Kathryn Johnston, in November, killing her in a hail of bullets.

Narcotics officers have admitted to planting marijuana in Ms. Johnston’s home after her death and submitting as evidence cocaine they falsely claimed had been bought at her house, according to the court filings.

Two of the three officers indicted in the shooting, Gregg Junnier and Jason R. Smith, pleaded guilty on Thursday to state charges including involuntary manslaughter and federal charges of conspiracy to violate Ms. Johnston’s civil rights.

The day she was killed, narcotics officers said, they arrested a drug dealer who said he could tell them where to recover a kilogram of cocaine, and pointed out Ms. Johnston’s modest green-trimmed house at 933 Neal Street.

Instead of hiring an informant to try to buy drugs at the house, the officers filed for a search warrant, claiming that drugs had been bought there from a man named Sam. Because they falsely claimed that the house was equipped with surveillance equipment, they got a no-knock warrant that allowed them to break down the front door.

First, according to court papers, they pried off the burglar bars and began to ram open the door. Ms. Johnston, who lived alone, fired a single shot from a .38-caliber revolver through the front door and the officers fired back, killing her.

After the shooting, they handcuffed her and searched the house, finding no drugs.

“She was without question an innocent civilian who was caught in the worst circumstance imaginable,” Mr. Howard, the district attorney, said at a news conference on Thursday. “When we learned of her death, all of us imagined our own mothers and our own grandmothers in her place, and the thought made us shudder.”

When no drugs were found, the cover-up began in earnest, according to court papers.

Officer Smith planted three bags of marijuana, which had been recovered earlier in the day in an unrelated search, in the basement. He called a confidential informant and instructed him to pretend he had made the drug buy described in the affidavit for the search warrant.

(Note: ellipsis added.  The online title of the article was: "Prosecutors Say Corruption in Atlanta Police Dept. Is Widespread.")