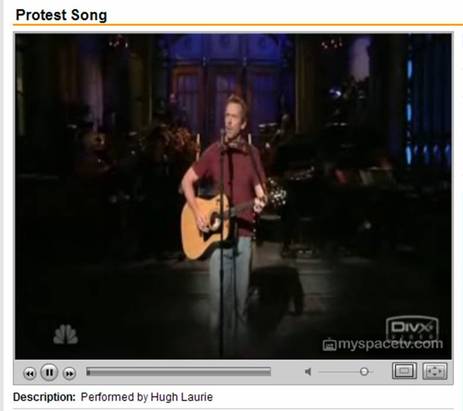 Source of image:  screen capture from the first link below.

In one hilarious bit, Laurie announces he is going to sing a "protest song" and proceeds to sing one of those earnest-sounding, pompous, self-righteous save-the-world-with-a-cliché songs that were so common in the late 1960s and the 1970s.

The hilarious bit: whenever Laurie gets to the part of the song where he is going to tell us the "answer"—- he mumbles.

After showing the clip to my principles students, I told them that to fill in the mumbling with something effective, you need to know some economics.

Here is a link to the SNL version:

The song was apparently first performed as part of a show called "A Bit of Fry and Laurie" that was broadcast in the early 1990s in Britain. Here is a link to the earlier version of the song: