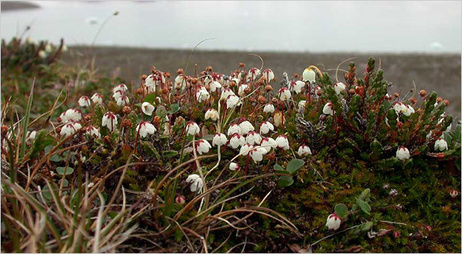 "White arctic bell-heather (Cassiope tetragona) in the remote Svalbard archipelago of Norway."  Source of caption and photo:  online version of the NYT article quoted and cited below.

(p. A12) Many Arctic plant species have readily adjusted to big climate changes, repeatedly recolonizing the rugged islands of the remote Svalbard archipelago off Norway’s coast through 20,000 years of warm and cool spells since the frigid peak of the last ice age, researchers report in today’s issue of the journal Science.

Their finding implies that, in the Arctic at least, plants may be able to shift long distances to follow the climate conditions for which they are best adapted as those conditions move under the influence of human-caused global warming, the researchers and some independent experts said.

Some experts on climate and biology who were not involved with the study, which was led by scientists from the University of Oslo, said it provided a glimmer of optimism in the face of generally bleak scientific assessments of the vulnerability of ecosystems to the atmospheric buildup of greenhouse gases.

Terry L. Root, a biologist at Stanford who has been involved with many studies concluding that plants and animals are measurably feeling the effects of human-driven warming, described the Svalbard research as “great news.”

Norwegian and French scientists analyzed the DNA of more than 4,000 samples of nine flowering plant species from Svalbard, a group of islands between the Scandinavian mainland and the North Pole. They said they found genetic patterns that could be explained only by the repeated re-establishment of plant communities after the arrival of seeds or plant fragments from Russia, Greenland or other Arctic regions hundreds of miles away.

For the original Science article, see: