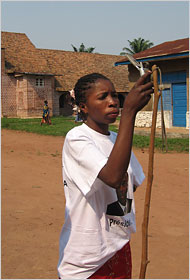 "Micheline Kapinga of Kamponde, Congo, uses a cellphone on the only site in the village that is sometimes able to capture a signal."  Source of caption and photo:  online version of the NYT article cited below.

I AM just back from Tanzania in East Africa.

In the mornings, disregarding the protests of the armed guards at my lodge near Arusha, I jogged along muddy footpaths. After the heavy rains, and under a low, misty sky, the fields looked as ruined as a battlefield. Very poor farmers and their children stared curiously at me as I passed.

In the afternoons, I attended the TEDGlobal 2007 conference, held by the Technology, Entertainment and Design organization in the modern Ngurdoto Mountain Lodge. The contrast between the two experiences troubled me.

TED conferences, mostly held in Monterey, Calif., are invitation-only affairs, are attended by the aristocracy of Silicon Valley and are known for their adventurousness in drawing together wildly disparate trends in technology, business and the arts.

On this occasion, Bono, the Irish rock star and champion of African causes, had persuaded the conference’s organizer, Chris Anderson, to invite the usual crowd, as well as African entrepreneurs, activists, health care professionals and artists to this tropical, leafy region midway between the Serengeti Plain and Mount Kilimanjaro.

At least one of the African attendees of the conference was representative of the kind of technological entrepreneurialism that the show advocated.

Alieu Conteh, the chairman of Vodacom Congo, was born in Gambia, in West Africa, 55 years ago and moved to Congo in 1981. For years, he was a successful coffee buyer and exporter.

Congo is about the size of Western Europe and has an estimated population of 65 million people. It is one of the least-developed nations in the world, with less than 300 miles of roads, most of them in poor condition.

In 1997, Mr. Conteh recalled in an interview, he heard Laurent D. Kabila, then the country’s president, deliver a speech in which he called upon his countrymen to rebuild Congo’s infrastructure after the 30-year dictatorship of Mobutu Sese Seko. Mr. Conteh, who had no experience in telecommunications, said he was inspired. He decided to build the nation’s first GSM (Global System for Mobile communications) digital network.

At the time, according to Mr. Conteh, fewer than 10,000 people living in Congo — mainly business people, foreigners and government employees — had mobile handsets. They paid $7 to $10 a minute to make a call, using an older technology. Less than 15,000 homes had a telephone landline.

Mr. Conteh said he went, cap in hand, to the minister of communications to ask for the country’s first GSM license. In January 1998 he got it — but he first had to pay the government a license fee of $100,000. Over the years, and with little explanation, he said, the government, which is often terribly short of money, increased the license fee, first to $400,000, then $2 million.

For more of the commentary, see: