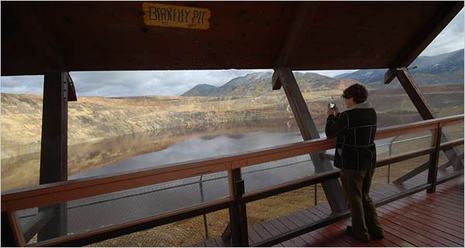 The Berkeley Pit was once a copper mine, and now holds a lake of toxic waste.  Source of photo:  online version of the NYT article quoted and cited below.

Here are a few paragraphs from a fascinating story about a couple of people who seem to be practicing what Taleb is preaching in The Black Swan:

BUTTE, Mont. — Death sits on the east side of this city, a 40-billion-gallon pit filled with corrosive water the color of a scab. On the opposite side sits the small laboratory of Don and Andrea Stierle, whose stacks of plastic Petri dishes are smeared with organisms pulled from the pit. Early tests indicate that some of those organisms may help produce the next generation of cancer drugs.

From death’s soup, the Stierles hope to coax life.

“I love the idea of looking at toxic waste and finding something of value,” said Ms. Stierle, 52, a chemistry researcher at Montana Tech of the University of Montana.

For decades, scientists assumed that nothing could live in the Berkeley Pit, a hole 1,780 feet deep and a mile and a half wide that was one of the world’s largest copper mines until 1982, when the Atlantic Richfield Company suspended work there. The pit filled with water that turned as acidic as vinegar, laced with high concentrations of arsenic, aluminum, cadmium and zinc.

Mr. Stierle is a tenured professor at Montana Tech, but his wife gets paid only for teaching an occasional class or if there is a grant to finance her research. From 1996 to 2001 they applied for dozens of grants, but received only rejection letters. So they financed their own research, using personal savings and $12,000 in annual patent royalty payments. In 2001, they won a six-year, $800,000 grant from the United States Geological Survey.

“Their work is considered a very high-risk approach,” said Matthew D. Kane, a program director at the National Science Foundation. “It takes a long time to get funding, and some luck to find active compounds.”

Unlike scientists at large research universities, who commonly teach only one class a year and employ graduate students to run their laboratories, Mr. Stierle teaches four classes each semester at a college with 2,000 undergraduates and no major research presence.

The couple said they were negotiating privately with a pharmaceutical company to test some of the compounds they have discovered and possibly turn them into drugs. As they wait, they open another Mason jar filled with murky pit water, draw a sample and return to work.

“The pit very easily could have been a complete waste of time,” Mr. Stierle said. “We just had luck and worked our butts off. We take that first walk into the dark.” 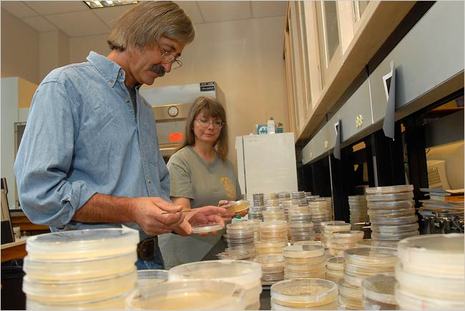 In the photo immediately above, Don and Andrea Steirle work in their lab.  The map to the left shows the location of the Berkeley Pit.  Source of the photo and map:  online version of the NYT article quoted and cited above.

One thought on “Academic Entrepreneurs in a Toxic Wasteland”