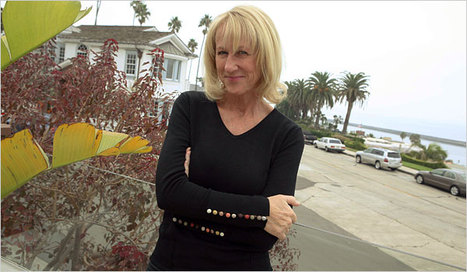 "Bonnie Brown joined Google when it had 40 employees."  Source of caption and photo:  online version of the NYT article quoted and cited below.

(p. A1)  SAN FRANCISCO, Nov. 11 — Bonnie Brown was fresh from a nasty divorce in 1999, living with her sister and uncertain of her future. On a lark, she answered an ad for an in-house masseuse at Google, then a Silicon Valley start-up with 40 employees. She was offered the part-time job, which started out at $450 a week but included a pile of Google stock options that she figured might never be worth a penny.

After five years of kneading engineers’ backs, Ms. Brown retired, cashing in most of her stock options, which were worth millions of dollars. To her delight, the shares she held onto have continued to balloon in value.

“I’m happy I saved enough stock for a rainy day, and lately it’s been pouring,” said Ms. Brown, 52, who now lives in a 3,000-square-foot house in Nevada, gets her own massages at least once a week and has a private Pilates instructor. She has traveled the world to oversee a charitable foundation she started with her Google wealth and has written a book, still unpublished, “Giigle: How I Got Lucky Massaging Google.”

When Google’s stock topped $700 a share last week before dropping back to $664 on Friday, outside shareholders were not the only ones smiling. According to documents filed on Wednesday with the Securities and Exchange Commission, Google employees and former employees are holding options they can cash in worth about $2.1 billion. In addition, current employees are sitting on stock and unvested op-(p. A16)tions, or options they cannot immediately cash in, that together have a value of about $4.1 billion.

Although no one keeps an official count of Google millionaires, it is estimated that 1,000 people each have more than $5 million worth of Google shares from stock grants and stock options. 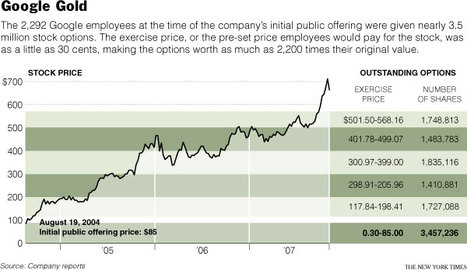