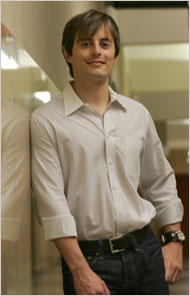 "Thor Halvorssen at his office in the Empire State Building."  Source of caption and photo:  online version of the NYT article quoted and cited below.

(p. 11)  Since 2005, having already founded two nonprofit organizations focused on free speech and human-rights issues, Mr. Halvorssen has made the movie business part of his portfolio of controversy-stirring efforts. Established with a small amount of his money, his nonprofit Moving Picture Institute has raised about $1.5 million in donations to date to pay for, promote and seek distribution for documentary films.

At a time when the most successful documentaries on political or social issues all seem to be anti-corporate, anti-Bush, pro-environmentalist and left-leaning, the Moving Picture Institute has backed pro-business, anti-Communist and even anti-environmentalist ones. The latest, “Indoctrinate U,” follows the first-time filmmaker Evan Coyne Maloney as he turns Michael Moore’s guerrilla interview tactics on their head to address what he sees as political correctness on campus. In one scene, Mr. Maloney strolls into the women’s studies centers on several campuses and, playing innocent, asks directions to the men’s studies center. He is met with genuine bafflement, derisive laughs or icy hostility.

To Mr. Halvorssen his new role as a fledgling movie mogul dovetails perfectly with his other activities. “Pop culture has (p. 12) the power to be transformational culture,” he said. “A film can reach a lot more people than a white paper. You could think of the film as a trailer for the white paper.”

He paused, then said, “Put it this way: What ‘Sideways’ did for pinot noir, I want to do for freedom.”

His upbringing helped make a self-described “classical liberal” rather than a conservative, big on free markets and individual liberties, and convinced that “government is not your friend most of the time,” he said. “And I abhor fascism, whether it’s socialist or National Socialist.”

“The Sugar Babies,” a documentary by Amy Serrano that Mr. Halvorssen helped produce, takes on the issue human trafficking of Haitian workers on sugar plantations in the Dominican Republic. A screening at Florida International University in June erupted into what local press described as “a near riot” between Dominican and Haitian audience members.

Other documentaries championed by the Motion Picture Institute include “Hammer & Tickle,” a lighthearted look at the subversive jokes Soviet citizens told about their leaders.

And Mr. Halvorssen was a co-producer of “Freedom’s Fury,” narrated by Olympic swimmer Mark Spitz, which describes the role Hungary’s Olympic water polo team played in that nation’s 1956 uprising against its Soviet occupiers.

No doubt the most contentious film on the Motion Picture Institute roster so far is ”Mine Your Own Business,” billed as ”the world’s first anti-environmentalist documentary.” Phelim McAleer, an Irish journalist who received a fellowship from the Motion Picture Institute, traveled to Romania, Madagascar and Chile, where international environmental groups oppose planned mining operations. His film — financed by Gabriel Resources, a Canadian mining company — portrays environmentalists as condescending elitists while impoverished locals insist they would welcome the jobs and development the mines would bring.

Mr. Halvorssen speaks of a ”YouTube revolution” with the Internet, along with on-demand cable and satellite television, freeing independent filmmakers from Hollywood dominance.

Ultimately, he added, he hopes that ”exploiting technology, marketing and alternative distribution will transform human rights, making it inspiring and even sexy.”

For more information on the documentaries of Halvorssen’s Moving Picture Institute, see:

Poster for the movie "Mine Your Own Busines."  Source for poster:   http://billhobbs.com/myobposter.gif