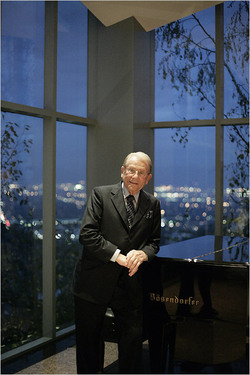 "Alfred E. Mann, at his home in Beverly Hills, Calif., has put nearly $1 billion of his own money into developing an insulin that can be inhaled."  Source of caption and photo:  online version of the NYT article quoted and cited below.

(p. C1)  LOS ANGELES, Nov. 15 — Pfizer, the world’s biggest drug company, flopped miserably with a seemingly can’t-miss idea. But Alfred E. Mann is so certain he can succeed that he is betting nearly $1 billion of his own money on the effort.

Pfizer’s failure was a form of insulin that people with diabetes could inhale rather than inject. But last month, after selling only $12 million worth of inhaled insulin in the first nine months of the year, Pfizer said it would take a $2.8 billion charge and abandon the product.

Mr. Mann, the 82-year-old chief executive and controlling shareholder of the MannKind Corporation, is not deterred. He says his company’s inhalable insulin is not just a way to avoid needles but is medically superior to Pfizer’s product and to injected insulin.

If he is right, he could help change the way diabetes is treated.

“I believe this is one of the most valuable products in history in the drug industry, and I’m willing to back it up with my estate,” Mr. Mann said at his 23,000-square-foot mansion overlooking the San Fernando Valley. The interview took place on a Saturday evening, which Mr. Mann said was the only opening in his seven-day work schedule.

Despite Mr. Mann’s remarkable entrepreneurial career — he has founded more than a dozen aerospace and medical device companies — there are people who wonder whether he has so much invested in this latest effort, both financially and emotionally, that he cannot see any odds against him.

“I don’t know of an individual who has spent as much of a personal fortune on a long shot,” said Andrew Forman, an analyst with WR Hambrecht & Company. Mr. Forman said MannKind faced numerous regulatory and patent challenges, as well as possible competition from the leaders in injected insulin, Eli Lilly and Novo Nordisk, which are also developing inhalable products. 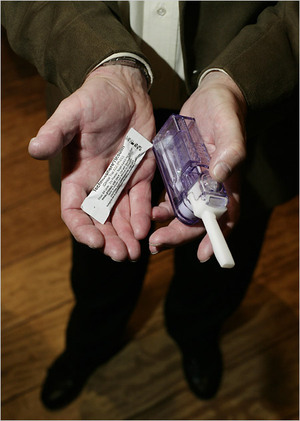 "The inhaled insulin device, about the size of a cellphone."  Source of caption and photo:  online version of the NYT article quoted and cited above.