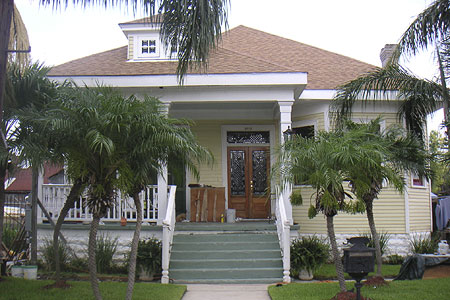 "City officials in New Orleans put this house, which flooded up to the floorboards when Hurricane Katrina hit and has undergone $90,000 in repairs, on a list of properties to be demolished because it supposedly was "in imminent danger of collapse.""  Source of caption and photo:  online version of the WSJ article quoted and cited below.

(p. A1)  NEW ORLEANS — IdaBelle Joshua worked hard to take care of her two-story house in the Lower Ninth Ward, even after Hurricane Katrina flooded it up to the roof and exiled her 150 miles away.

She spent $5,000 to have the brick house gutted, $275 to clean it and then went to City Hall on July 5 to make sure 2611 Forstall St. wasn’t on a list of derelict properties here facing demolition because of storm damage. Two city employees assured her that the house was safe, she says.

Two days later, her nephew called. He had gone by to mow the lawn. But the house where Ms. Joshua and her late husband had raised three children was gone. It had been knocked down by the city. Since then, she has been trying to get an explanation, but with no luck.

"I’m a 79-year-old senior citizen, crippled and can’t travel, and I can’t pay anybody," she says. "I will be dead and gone by the time I get any recourse from the city. It’s a travesty."

(p. A10)  For many, though, getting off the demolition list is an exercise in futility. Owners are told to object in writing, but the city hasn’t spelled out its rules for granting a reprieve — or proof a house is safe from bulldozers. Ms. Breaux says the city is about to put more information on its Web site, including a search engine so owners can keep track of their property’s status. Officials also plan to increase staffing in the City Hall department in charge of demolitions.

After $90,000 in post-Katrina repairs, the granite kitchen countertops at Chanel Debose’s house at 3519 Washington Ave. are gleaming again. Workers just scraped the front porch for a new coat of paint. But her house also wound up on the demolition list.

When the storm hit, Ms. Debose and her husband rescued about 25 people in his fishing boat before giving it away and trudging out of the city on foot. She is angry that anyone trying to save New Orleans could have so much trouble fighting city hall.

"There’s no due process here," she says. "It’s their process." 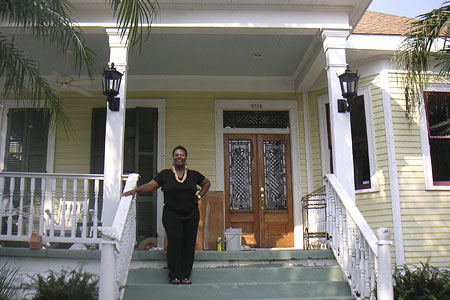 "Mrs. Debose, a 36-year-old lawyer, used to dream about living here when she was growing up in a housing project nearby. "Ooh, when I get rich, I’m going to buy that house someday," she recalls thinking. She and her husband, Stanley, rescued about 25 people in his boat after Katrina inundated the neighborhood."  Source of caption and photo:  online version of the WSJ article quoted and cited above.