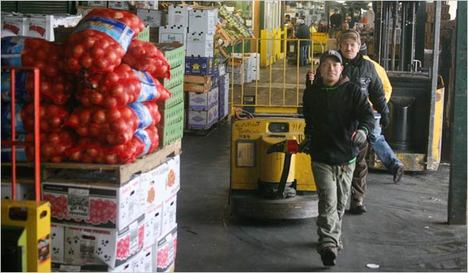 “Produce at the huge Hunts Point Market in the Bronx. Researchers at the University of California, Davis, have been challenging assumptions about the carbon footprint of local foods versus those that are transported long distances.”  Source of caption and photo:  online version of the NYT article quoted and cited below.

(p. 11)  The local food, or locavore, movement has so much momentum that some of the food glitterati have declared that such food is better than organic.

But now comes a team of researchers from the University of California, Davis, who have started asking provocative questions about the carbon footprint of food. Those questions threaten to undermine some of the feel-good locavore story line, not to mention my weekend forays for produce. (A carbon footprint is a measure of the impact of human activities on the environment in terms of the amount of greenhouse gases produced.)

While the research is not yet complete, Tom Tomich, director of the University of California Sustainable Agriculture Research and Education Program, said the fact that something is local doesn’t necessarily mean that it is better, environmentally speaking.

The distance that food travels from farm to plate is certainly important, he says, but so is how food is packaged, how it is grown, how it is processed and how it is transported to market.

Consider strawberries. If mass producers of strawberries ship their product to Chicago by truck, the fuel cost of transporting each carton of strawberries is relatively small, since it is tucked into the back along with thousands of others.

But if a farmer sells his strawberries at local farmers’ markets in California, he ferries a much smaller amount by pickup truck to each individual market. Which one is better for the environment?

Mr. Tomich said a strawberry distributor did the math on the back of an envelope and concluded that the Chicago-bound berries used less energy for transport.