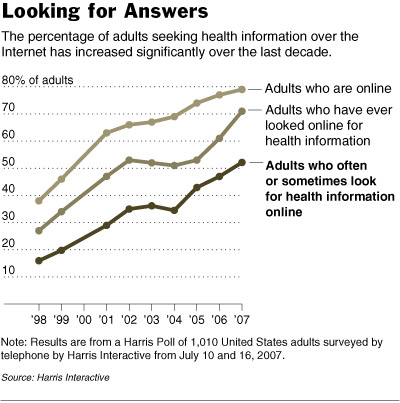 (p. C1)  In politics, every serious candidate for the White House has a health care plan. So too in business, where the two leading candidates for Web supremacy, Google and Microsoft, are working up their plans to improve the nation’s health care.

(p. C8)  If the efforts of the two big companies gain momentum over time, that promises to accelerate a shift in power to consumers in health care, just as Internet technology has done in other industries.

Today, about 20 percent of the nation’s patient population have computerized records — rather than paper ones — and the Bush administration has pushed the health care industry to speed up the switch to electronic formats. But these records still tend to be controlled by doctors, hospitals or insurers. A patient moves to another state, for example, but the record usually stays.

The Google and Microsoft initiatives would give much more control to individuals, a trend many health experts see as inevitable. “Patients will ultimately be the stewards of their own information,” said John D. Halamka, a doctor and the chief information officer of the Harvard Medical School.

Already the Web is allowing people to take a more activist approach to health. According to the Harris survey, 58 percent of people who look online for health information discussed what they found with their doctors in the last year.

It is common these days, Dr. Halamka said, for a patient to come in carrying a pile of Web page printouts. “The doctor is becoming a knowledge navigator,” he said. “In the future, health care will be a much more collaborative process between patients and doctors.”

Microsoft and Google are hoping this will lead people to seek more control over their own health records, using tools the companies will provide.