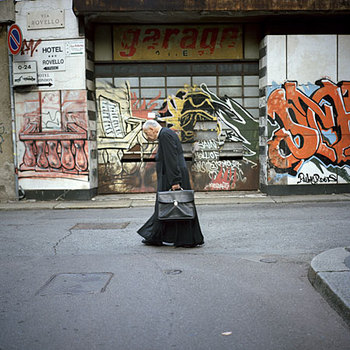 "A priest passes an abandoned garage covered with graffiti in Milan. Italy’s malaise, an economic, political, and social funk, was summed up in a recent poll: Italians report themselves to be the least happy people in Western Europe."  Source of caption and photo:  online verison of the NYT article quoted and cited below.

(p. A1)  ROME — All the world loves Italy because it is old but still glamorous. Because it eats and drinks well but is rarely fat or drunk.  Because it is the place in a hyper-regulated Europe where people still debate with perfect intelligence what, really, the red in a stoplight might mean.

But these days, for all the outside adoration and all of its innate strengths, Italy seems not to love itself.   The word here is “malessere,” or “malaise”; it implies a collective funk — economic, political and social — summed up in a recent poll: Italians, despite their claim to have mastered the art of living, say they are the least happy people in Western Europe.

“It’s a country that has lost a little of its will for the future,” said Walter Veltroni, the mayor of Rome and a possible future center-left prime minister.  “There is more fear than hope.”

. . .   In 1987, Italy celebrated its economic parity with Britain.  Now Spain, which joined the European Union only a year earlier, may soon overtake it, and Italy has fallen behind Britain.

Italy’s low-tech way of life may enthrall tourists, but Internet use and commerce here are among the lowest in Europe, as are wages, foreign investment and growth. Pensions, public debt and the cost of government are among the highest.

. . .   Many worry . . . that Italy may share the same fate as the Republic of Venice, based in what many say is the most beautiful of cities, but whose domination of trade with the Near East died with no culminating event. Napoleon’s conquest in 1797 only made it official.

Now it is essentially an exquisite corpse, trampled over by millions of tourists.  If Italy does not shed its comforts for change, many say, a similar fate awaits it: blocked by past greatness, with aging tourists the questionable source of life, the Florida of Europe.

. . .   “We have reached a point where hoping for some kind of white knight coming in saying, ‘We’ll sort you out,’ is over.”

“We Italians have our destiny in our hands more than ever before,” he said.

One thought on “Unhappy Italians: “More Fear than Hope””