Source of graphic: the online version of the WSJ article quoted and cited below.

(p. A1)  JORDAN, Mont. — Prospecting in Montana’s badlands, rock ax in hand, paleontologist Jack Horner picks up a piece of the jawbone of a dinosaur. He examines the splinter, then puts it back and moves on. It isn’t the kind of bone he is looking for.

Prof. Horner is searching for something that many scientists believe no longer exists: dinosaur bones that harbor blood cells, protein and, perhaps, even DNA.

Prof. Horner, a curator at the Museum of the Rockies in Bozeman, is among the world’s most influential and offbeat paleontologists. He pioneered studies of dinosaur parent-(p. A12)ing behavior, species variation and bone cells. He is dyslexic, a former Special Forces operative of the Vietnam War era, a MacArthur Foundation "genius" fellow, and a chaired professor of Montana State University who never finished a formal college degree.

"The lenses that people normally use to look at stuff are broken in Jack," says Mary Schweitzer, an assistant professor of paleontology at North Carolina State University, who has worked with him for years. "That’s what makes Jack such a good scientist. Every now and then, every field should get a renegade weirdo in it who challenges assumptions."

"The chances of finding any [dinosaur] DNA are pretty low," Prof. Horner acknowledges. "I am still hopeful."

In a field mostly outside the mainstream of federal research funding, Prof. Horner has a knack for attracting private grants. Star Wars producer George Lucas, Qualcomm co-founder Klein Gilhousen and Wade Dokken, a developer of Montana real estate, have contributed toward his research, the university says. Nathan Myhrvold, formerly chief technology officer at Microsoft Corp. and co-founder of Intellectual Ventures LLC, is helping to underwrite this season’s fieldwork.

This summer, in Montana’s Hell Creek Formation, Prof. Horner is searching the last landscape inhabited by dinosaurs. More than 65 million years ago, this plain was a wetland where herds of horned Triceratops watered. Today, it is an arid outwash of boulders, cactus and sage. The red and gray soil is littered with white shards of petrified wood that ring like bone china when tapped together and countless crumbs of dinosaur bone.

"As long as you are not bound by preconceived ideas of what you can find," Prof. Horner says, "there are an awful lot of things you can discover." 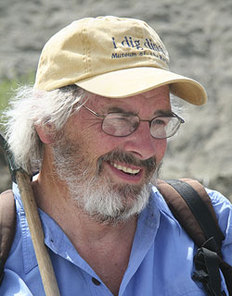 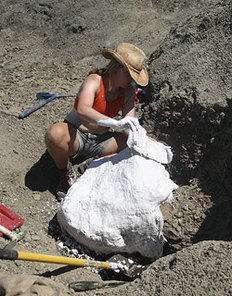 At top, Prof. Horner; at bottom: "Sarah Keenan, 21, an undergraduate at the University of St. Andrews in Scotland who is working this summer for Prof. Horner, covers the fossilized triceratops frill in a protective jacket of plaster."  Source of caption and photos: the online version of the WSJ article quoted and cited above.