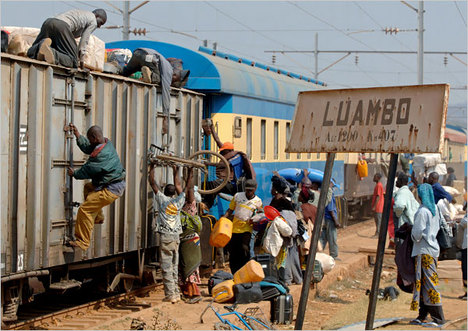 “A crowded train traveling through Katanga Province. Goods and people are crammed in, and bathrooms are used for storage.” Source of caption and photo: online version of the NYT article quoted and cited below.

(p. A4) In large swaths of Congo, a vast country the size of Western Europe, roads are impassable or nonexistent, large riverboats no longer ply the waterways and air travel is prohibitively expensive, leaving many people to rely on an increasingly dangerous railway system long past its prime.
Fresh from its first democratic elections in nearly 50 years and still struggling to emerge from civil war, Congo is trying to get its trains running again. But it has a long way to go.
. . .
The bathrooms in first class become filthy soon after a trip begins. In second and third class, the bathrooms are used for storage. In one car, five large bags of charcoal were stuffed into a bathroom, and people relieved themselves in buckets or out windows.
The railway employs over 13,000 people, but the last time paychecks were sent out was in May, and that was payment for the spring of 2005. So many employees do not go to work, and bribes are widespread.
“Sometimes it’s difficult to resist temptations,” said Agustín, the police chief at the Kamina station, who gave only his first name. “I do bad things.”
“I haven’t been paid in 29 months,” he added. “How am I supposed to send my children to school?”
Léon, a conductor and machinist who gave only his first name, thinks the problem begins in Kinshasa, the capital. “This is a state-owned company,” he said. “It’s bankrupt because of the government. The way things are going, we won’t last two years.” 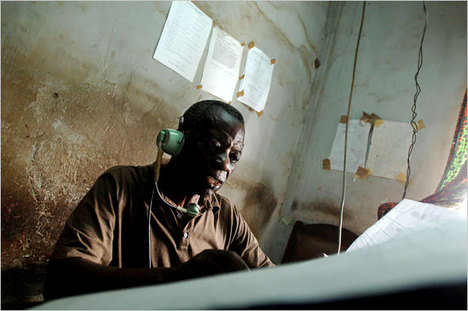 “A train controller relays the position of a train to another station. Because pay is so infrequent, many employees do not go to work and bribes are widespread.” Source of caption and photo: online version of the NYT article quoted and cited above.