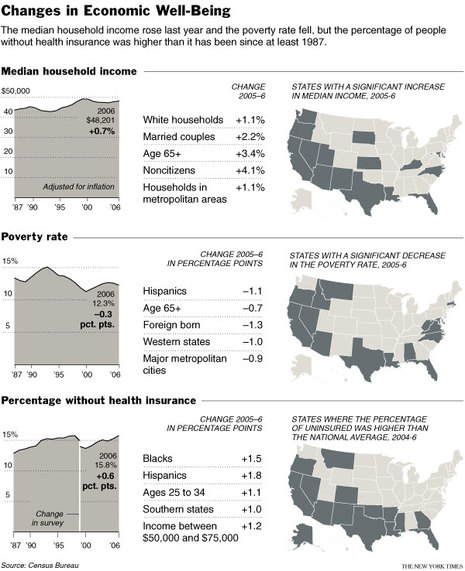 Source of graphic:  online version of the NYT article quoted and cited below.

(p. A1)  . . .  slight improvements in household income and a drop in the poverty rate came during a period of job growth, particularly toward the end of 2006, and declining inflation as a result of falling oil prices.  .  . .

Some Republicans seized on the new data as evidence that Bush administration policies had been good for people’s pocketbooks. In a statement, President Bush said the news was a sign that Congress should not raise taxes. The data, he said, confirmed “that more of our citizens are doing better in this economy, with continued rising incomes (p. A14) and more Americans pulling themselves out of poverty.”

Over all, the nation’s median household income rose to $48,201 in 2006, from $47,845 in 2005. It was the second consecutive year in which income rose slightly faster than inflation, after five years of decline.

Douglas J. Besharov, a resident scholar at the American Enterprise Institute, a conservative research group, said that while the year-to-year increase in household income was small, the broader picture over the last few decades was more promising and more important.

“Over all,” Mr. Besharov said, “a lot of groups have done better over the last 40 years.”

(Note:  the online version of the article had the title:   “Census Shows a Modest Rise in U.S. Income.”)