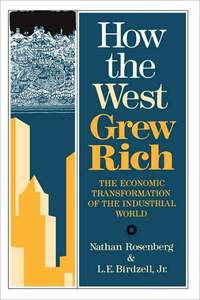 For many years I have wanted to carefully read Rosenberg and Birdzell’s How the West Grew Rich. I am glad I have finally done it, and wish I had done it sooner. It is a tour de force of careful scholarly synthesis of a wide range of issues related to a fundamental question with many implications for policy.
The authors operate within a broadly Schumpeterian perspective, in that they see innovation as the key driver of human progress. One underlying theme is that societies that give more play to experimentation in institutions, are more likely to allow, encourage, and widely adopt, innovations.
Although written over two decades ago, the book only rarely seems dated. (The only instance I can think of is the occasional attention that the authors give to Marxist claims, that are seldom taken as seriously now as they sometimes still were in 1986.)
The writing style is not easy to read, but is rewarding. They write with elegance, and subtlety, and dry wit.

The reference to the book:
Rosenberg, Nathan, and L.E. Birdzell, Jr. How the West Grew Rich: The Economic Transformation of the Industrial World. New York: Basic Books, 1986.