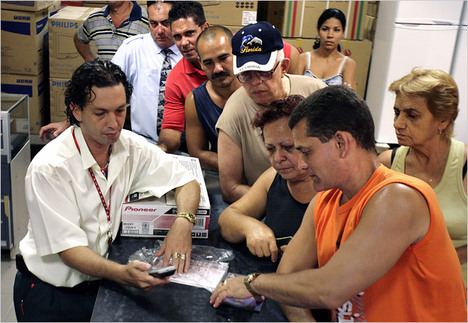 “Cubans in Havana recently bought DVD players, among newly available appliances.” Source of caption and photo: online version of the NYT article quoted and cited below.

(p. A1) HAVANA — Can a rice maker possibly be revolutionary?
There they were, piled up one atop another, Chinese-made rice makers selling for $70 each. Beside them, sleek DVD players. Across the well-stocked electronics store were computers and televisions and other household appliances that President Raúl Castro recently decreed ought to be made available to average Cubans, or at least those who could afford them.
Since finally succeeding his ailing 81-year-old brother, Fidel, in February, Mr. Castro, 76, who appeared before hundreds of thousands of Cubans at a May Day rally on Thursday here in the capital, has been busy with a flurry of changes. In the last eight weeks he has also opened access to cellphones, lifted the ban on Cubans using tourist hotels and granted farmers the right to manage unused land for profit.
More is on the horizon, government officials say, like easing restrictions on traveling abroad and the possibility of allowing Cubans to buy and sell their own cars, and perhaps even their homes. Each of these changes may be microscopic in contrast to the outsize problems facing Cuba. But taken together, they are shaking up this stoic, time-warped place.