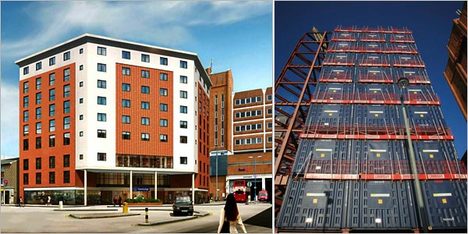 “The Travelodge chain in Britain is building two hotels from stackable metal containers imported from China. One of the hotels, in Uxbridge in West London, is shown under construction at right and in a rendering at left.” Source of the caption and photo: online version of the NYT article quoted and cited below.

(p. 23) TRAVELODGE, one of the largest budget hotel chains in Britain, is a company in a hurry.
. . .
Once the company finds a location, it turns to a construction partner with equally aggressive plans: Verbus Systems, a London-based company that builds rooms in metal containers in factories near Shenzhen, China, and delivers them ready to be stacked into buildings up to 16 stories tall.
Verbus Systems’ commercial director, Paul Rollett, said his company “can build a 300-room hotel anywhere on the planet in 20 weeks.”
. . .
When they arrive at Heathrow, the containers will be hoisted into place by crane. The containers, which are as large as 12 by 47 feet, will support one another just as they do when they are crossing the ocean by ship, Mr. Rollett said. No additional structure is necessary.
. . .
DON CARLSON, the editor and publisher of Automated Builder, a trade magazine based in Ventura, Calif., said that in hotels, “modular is definitely the wave of the future.” Modular buildings, he said, are stronger, and more soundproof, because stacking units — each a fully enclosed room — “gives you double walls, double floors, double everything.”
Mr. Rollett agreed, saying that with the steel shipping container approach, “You could have a party in your room, and people in the next room wouldn’t hear a thing.”
. . .
He is working with his British clients, which, he said, include a Travelodge competitor, Premier Inn, to make the best possible use of the assembly-line method. “We’re increasing the degree of modularity,” he said, noting that the latest units come with fully fitted bathrooms and “even the paint on the walls.”
The only thing they don’t have, he said, “is the girl to put a chocolate on your pillow.”