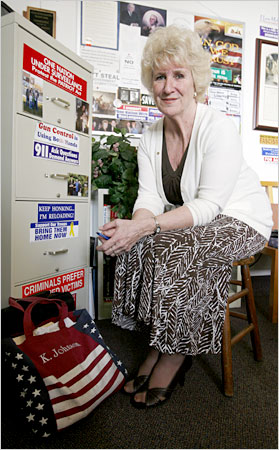 “State Senator Karen S. Johnson of Arizona is the sponsor of a bill permitting firearms on campuses.” Source of caption and photo: online version of the NYT article quoted and cited below.

(p. A10) PHOENIX — Horrified by recent campus shootings, a state lawmaker here has come up with a proposal in keeping with the Taurus .22-caliber pistol tucked in her purse: Get more guns on campus.
The lawmaker, State Senator Karen S. Johnson, has sponsored a bill, which the Senate Judiciary Committee approved last week, that would allow people with a concealed weapons permit — limited to those 21 and older here — to carry their firearms at public colleges and universities. Concealed weapons are generally not permitted at most public establishments, including colleges.
Ms. Johnson, a Republican from Mesa, said she believed that the recent carnage at Northern Illinois University could have been prevented or limited if an armed student or professor had intercepted the gunman. The police, she said, respond too slowly to such incidents and, besides, who better than the people staring down the barrel to take action?