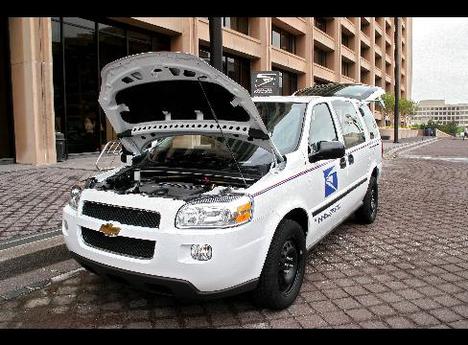 “A General Motors Corp. Chevrolet Uplander flexible fuel vehicle customized for the U.S. Postal Service (USPS) is shown in this handout photo taken on April 22, 2008. The USPS bought more than 30,000 ethanol-capable trucks and minivans from 1999 to 2005, making it the biggest American buyer of alternative-fuel vehicles.” Source of caption and photo: Bloomberg.com article quoted and cited below.

I saw a great CNN video clip on 8/11/08 showing some of the specially designed Post Office vehicles that were expensive, but that were mainly running on regular gasoline because it was too difficult to fill them with the high-ethanol blend that they were converted to use.
Before I finally found the clip on CNNMoney.com, by searching for it using the TRUVEO video search engine, I discovered that a version of the story had run back in May on Bloomberg.com. I quote from the story below.

May 21 (Bloomberg) — The U.S. Postal Service purchased more than 30,000 ethanol-capable trucks and minivans from 1999 to 2005, making it the biggest American buyer of alternative-fuel vehicles. Gasoline consumption jumped by more than 1.5 million gallons as a result.
The trucks, derived from Ford Motor Co.’s Explorer sport- utility vehicle, had bigger engines than Jeeps from the former Chrysler Corp. they replaced. A Postal Service study found the new vehicles got as much as 29 percent fewer miles to the gallon. Mail carriers used the corn-based fuel in just 1,000 of them because there weren’t enough places to buy it.

On the CNN Money video clip:
Jason Carroll was the reporter on the CNN Money clip that was added to CNNMoney.com on August 12, 2008, under the title “Snail Mail by Ethanol,” and is viewable at http://money.cnn.com/video/#/video/news/2008/08/12/news.usps.081108.cnnmoney 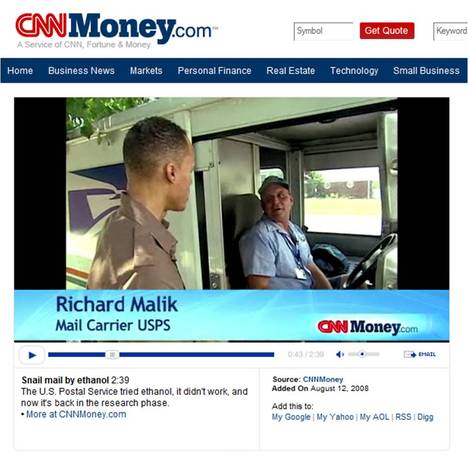 Reporter Jason Carroll talks with mail carrier Richard Malik, who says he has never used ethanol in his expensive mail truck that had been specially designed to use ethanol. Source of photo: screen capture from the CNN Money video clip discussed above.