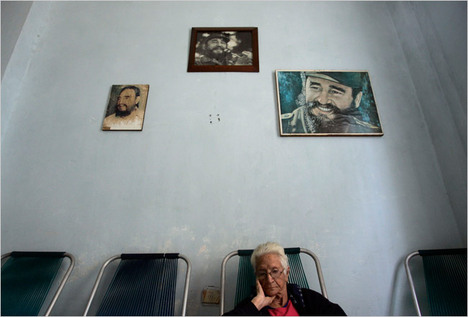 “A NATION’S PHOTO ALBUM. The prospect of life without Fidel Castro is unsettling to many Cubans, who are wary of drastic change.” Source of caption and photo: online version of the NYT article quoted and cited below.

(p. 1) We arrived not at the fine new airport in Havana I’ve used many times as a correspondent, but at a smaller, more crowded one that Cuba uses for these family visits, as if to rebuke exiles for having left.

Our reunion was delayed, however, by the surprise announcement last Tuesday that Fidel Castro — whose revolution had torn the family apart — was too ill to return to power. Suddenly, I was at work.
. . .
Still, what most surprised us was how little Cubans clamored for drastic change. Dictator or hero, Mr. Castro’s grip on power was ending, and no one seemed to care. Miriam was disappointed that the streets of Matanzas, Havana, San Agustín and Guanabacoa, the working class city across Havana Bay where she grew up, were tranquil, as if nothing at all had happened.
Of course we understood that things are not always as they seem, and that became clear when the maid in our 133-year-old hotel came to mop up the mess caused by a leaking pipe. Hearing the lilt of Miriam’s Spanish put her at ease. After chatting for a few minutes, she poked her head into the hallway to check for supervisors and shut the door. Only then did she speak from the heart.
“Nobody says it, but everybody knows that someone new could be worse than what we have now,” she whispered. It was the kind of dec-(p. 8)laration I’ve learned to trust because it stems from neither fear nor a desire to curry favor.
Despite having plenty of motivation to demand change — the frequent shortages, the decrepit housing, the cruelty of having one currency for tourists and another with far less buying power for Cubans — she said she feared change more than she feared the status quo. Then she checked the hallway again.
. . .
Truth is, things have changed since my first trip to Cuba in 1978. The heavy presence of the Soviet Union then is a faint shadow now, reflected in blue-eyed Cubans named Yuri. There seem to be more new cars on the roads, more fast food on the street, and more buildings undergoing repair. There even seem to be more buses and fewer people waiting for them since Fidel’s younger brother and temporary replacement, Raúl, publicly demanded that something be done about the pitiful mass transit system when I was here just a year ago.
But much has not changed, or has gotten worse. More families live two or three generations in the same cramped apartments. Detention, interrogation and other troubles still descend on people who dissent in ways as small as wearing a plastic wrist band embossed with the word “cambio,” which means change. The press is still controlled, and disloyalty to the Communist Party still raises the suspicion of neighbors that can lead to the loss of a job or a house. Dissidents remain enemies of the state.
. . .
The revolution itself has left many Cubans, including our relatives here, fed up with promises of change. They long ago tired of sacrificing for an ideal tomorrow; when we finally got together, three days after Fidel’s announcement, Miriam’s stepbrothers and sisters told me their main concerns are getting enough to eat, getting shoes for their children and getting to work on time each day.