Source of image: online version of the WSJ article quoted and cited below.

Apparently the WSJ‘s new owner, Rupert Murdoch, has not yet succeeded in killing the wonderful, quirky, inimitable front page, center column, articles that are part of what makes the WSJ great:

(p. A1) CHANDLER, Ariz. — Jerry Knoblach wants to bring wireless service to millions of rural Americans. His plan: Beam it down from balloons hovering at the edge of space.
This isn’t just hot air. His company, Space Data Corp., already launches 10 balloons a day across the Southern U.S., providing specialized telecom services to truckers and oil companies. His balloons soar 20 miles into the stratosphere, each carrying a shoebox-size payload of electronics that acts like a mini cellphone “tower” covering thousands of square miles below.
His idea has caught the eye of Google Inc., according to people familiar with the matter. The Internet giant — which is now pushing into wireless services — has considered contracting with Space Data or even buying the firm, according to one person.
. . .
Maintaining a telecom system based on gas-filled bladders floating in the sky requires some creativity. The inexpensive bal-(p. A9)loons are good for only 24 hours or so before ultimately bursting in the thin air of the upper atmosphere. The electronic gear they carry, encased in a small Styrofoam box, then drifts gently back to earth on tiny parachutes.
This means Space Data must constantly send up new balloons. To do that, it hires mechanics employed at small airports across the South. It also hires farmers — particularly, dairy farmers.
They’re “very reliable people,” says Mr. Knoblach. They have to “milk the cows 24-7, 365 days a year, so they’re great people to use as a launch crew.” Space Data pays them $50 per launch. 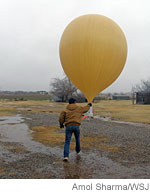 “A balloon being launched in Piedmont, Oklahoma.” Source of image: online version of the WSJ article quoted and cited above.