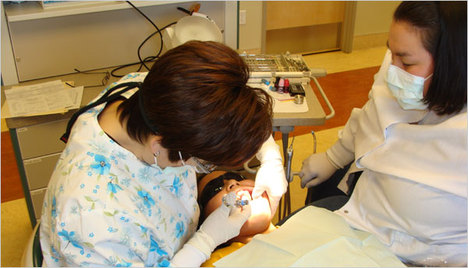 “Aurora Johnson, left, a dental therapist, filled cavities for Paul Towarak, 10, in the village of Unalakleet, Alaska. For more involved procedures, Ms. Johnson refers patients to a dentist.” Source of caption and photo: online version of the NYT article quoted and cited below.

Clayton Christensen (and co-authors) have suggested that disruptive technologies could reduce the cost and improve the quality of health care. One pathway for this to occur is new technologies that permit effective treatment to be carried out by para-professionals with less education than MD’s.
The article below illustrates Christensen’s idea, and also highlights the main obstacle to its implementation: professional organizations asking the government to regulate and restrict competition from the lower-cost para-professionals.

(p. A1) UNALAKLEET, Alaska — The dental clinic in this village on the edge of the Bering Sea looks like any other, with four chairs, a well-scrubbed floor and a waiting area filled with magazines.
But to the Alaska Dental Society and the American Dental Association, the clinic is a place where the rules of dentistry are flouted daily. The dental groups object not because of any evidence that the clinic provides substandard care, but because it is run by Aurora Johnson, who is not a dentist. After two years of training in a program unique to Alaska, Ms. Johnson performs basic dental work like drilling and filling cavities.
Some dentists who specialize in public health, noting that 100 million Americans cannot afford adequate dental care, say such training programs should be offered nationwide. But professional dental groups disagree, saying that only dentists, with four years of postcollegiate education, should do work like Ms. John-(p. A15)son’s. And while such arrangements are common outside the United States, only one American dental school, in Anchorage, offers such a program.
. . .
(p. A15) In Alaska, the A.D.A. and the state’s dental society had filed a lawsuit to block the program that trained people like Ms. Johnson, who are called dental therapists. The groups dropped the suit last summer after a state court judge issued a ruling critical of the dentists. But the A.D.A. continues to oppose allowing therapists to operate anywhere in the lower 49 states. Currently, therapists are allowed to practice only in Alaska, and only on Alaska Natives.
. . .
Therapists are a low-cost way to provide care to people who might not otherwise have access to it, according to Dr. Ron Nagel, a dentist and consultant for the Alaska Native Tribal Health Consortium, a nonprofit group financed mostly by federal money that provides medical and dental care to tribal communities. “There’s a huge need for these basic services,” Dr. Nagel said.
. . .
Since 1990, the number of private dentists has remained roughly flat, at 150,000, even as the United States population has increased 22 percent. As a result, dentists can easily fill their appointment books without seeing people who cannot meet their fees, and patients who have decayed teeth are suffering needlessly, said Tammy Guido, 50, who is one of seven students now training in Anchorage to become a therapist.
“We’re meeting a need that is not being met,” Ms. Guido said.
Alaskan tribal organizations sponsor Ms. Guido and the other students in Anchorage for the program. To be accepted, students must have a high school diploma or equivalency degree; for the newest class, 7 of 18 candidates were accepted.
In interviews, the students in this year’s class all said they were enthusiastic about the chance to serve communities that have little access to care. All seven had quit full-time jobs and must now get by on a $750 monthly stipend during the two years of training.
“Anybody who’s ever had a toothache can tell you it hurts,” said Ben Steward, 24, the only man in this year’s class. “But talk to someone who’s had a toothache for a year.”

One source of Christensen’s views on health care can be found in a chapter in:
Christensen, Clayton M., Scott D. Anthony, and Erik A. Roth. Seeing What’s Next: Using Theories of Innovation to Predict Industry Change. Boston, MA: Harvard Business School Press, 2004.

One thought on “A.D.A. Tries to Stop Dental Therapists from Competing with Dentists”