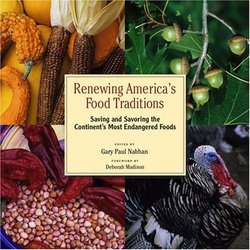 (p. D1) SOME people would just as soon ignore the culinary potential of the Carolina flying squirrel or the Waldoboro green neck rutabaga. To them, the creamy Hutterite soup bean is too obscure and the Tennessee fainting goat, which keels over when startled, sounds more like a sideshow act than the centerpiece of a barbecue.
But not Gary Paul Nabhan. He has spent most of the past four years compiling a list of endangered plants and animals that were once fairly commonplace in American kitchens but are now threatened, endangered or essentially extinct in the marketplace. He has set out to save them, which often involves urging people to eat them.
Mr. Nabhan’s list, 1,080 items and growing, forms the basis of his new book, an engaging journey through the nooks and crannies of American culinary history titled “Renewing America’s Food Traditions: Saving and Savoring the Continent’s Most Endangered Foods” (Chelsea Green Publishing, $35).
. . .
(p. C5) Some of the items on the list, like Ojai pixie tangerines and Sonoma County Gravenstein apples, were well on their way back before Mr. Nabhan came along. But other foods are enjoying a renaissance largely as a result of the coalition’s work.
The Makah ozette potato, a nutty fingerling with such a rich, creamy texture that it needs only a whisper of oil, is one of the success stories. It is named after the Makah Indians, who live at the northwest tip of Washington state and have been growing the potatoes for more than 200 years.
The Seattle chapters of Slow Food and the Chefs Collaborative adopted the rare potato. In 2006, Slow Food passed out seed potatoes to a handful of local farmers and gardeners, and chefs like Seth Caswell at the Stumbling Goat Bistro in Seattle began putting them on the menu.
Mr. Caswell says they are delicious roasted with a little hazelnut oil for salads or cut into wedges to go with burgers made with wagyu beef and Washington State black truffle oil.
There have been other revivals, the moon and stars watermelon and the tepary bean among them. The effort to reintroduce heritage turkeys to the American table was a precursor to the work of Mr. Nabhan and his collaborators.
The meaty Buckeye chicken, with its long legs suitable for ranging around, is considered one of five most endangered chicken breeds. Last year over 1,000 chicks were hatched and delivered to breeders, Mr. Nabhan said.
Justin Pitts, whose family has raised Pineywoods cattle in southern Mississippi for generations, credits the coalition with saving those animals. The small, lean cattle that provide milk, meat and labor spent centuries adapting to the pine barrens of the deep south, raised by families who can trace their herds back as far as anyone can remember. There are less than a dozen of those families left, and at one point the number of pure Pineywoods breeding animals fell to under 200. In the past few years, it has grown to nearly 1,000.
Mr. Pitts, who has “90 head if I can find them all,” sells New York strips and other cuts at the New Orleans farmers’ market and to chefs.
“I can’t raise cattle fast as they eat them,” he said.
He supports the notion that you’ve got to eat something to save it.
“If you’re keeping them for a museum piece,” he said, “you’ve just signed their death warrant.” 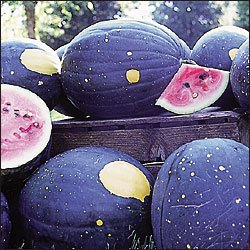