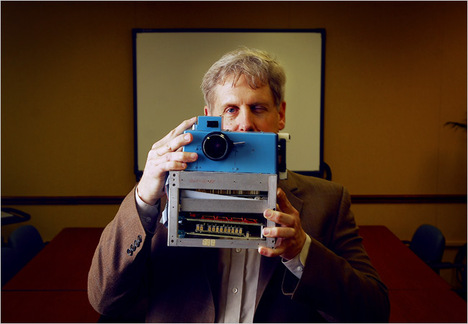 “Steven J. Sasson, an electrical engineer, created the first digital camera.” Source of caption and photo: online version of the NYT article quoted and cited below.

Kodak’s problems in detailed in the article below, fit very well Christensen’s account about how difficult it is for incumbent firms to embrace major disruptive technologies.

(p. C1) ROCHESTER — Steven J. Sasson, an electrical engineer who invented the first digital camera at Eastman Kodak in the 1970s, remembers well management’s dismay at his feat.
“My prototype was big as a toaster, but the technical people loved it,” Mr. Sasson said. “But it was filmless photography, so management’s reaction was, ‘that’s cute — but don’t tell anyone about it.’ ”
. . .
(p. C2) The company now has digital techniques that can remove scratches and otherwise enhance old movies. It has found more efficient ways to make O.L.E.D.’s — organic light-emitting diodes — for displays in cameras, cellphones and televisions.
This month, Kodak will introduce Stream, a continuous inkjet printer that can churn out customized items like bill inserts at extremely high speeds. It is working on ways to capture and project three-dimensional movies.
. . .
Paradoxically, many of the new products are based on work Kodak began, but abandoned, years ago. The precursor technology to Stream, for example, pushed ink through a single nozzle. Stream has thousands of holes and uses a method called air deflection to separate drops of ink and control the speed and order in which they are deposited on a page.
“I remember wandering through the labs in 2003, and seeing the theoretical model that could become Stream,” said Philip J. Faraci, Kodak’s president. “The technology was half-baked, but it was a real breakthrough.”
Other digital technologies languished as well, said Bill Lloyd, the chief technology officer. “I’ve been here five years, and I’m still learning about all the things they already have,” he said. “It seems Kodak had developed antibodies against anything that might compete with film.”
It took what many analysts say was a near-death experience to change that. Kodak, a film titan in the 20th century, entered the next one in danger of being mowed down by the digital juggernaut. Electronics companies like Sony were siphoning away the photography market, while giants like Hewlett-Packard and Xerox had a lock on printers.
“This was a supertanker that came close to capsizing,” said Timothy M. Ghriskey, chief investment officer at Solaris Asset Management, which long ago sold its Kodak shares. 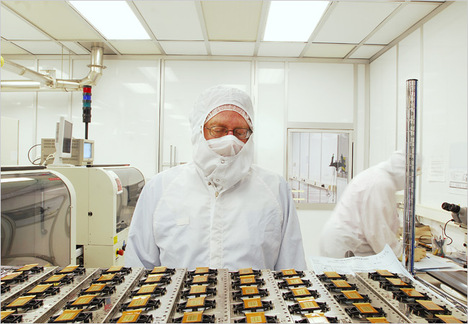 “Allan Camp, a technician at Kodak’s inkjet development center in Rochester, works on the development of print heads for printers.” Source of caption and photo: online version of the NYT article quoted and cited above.