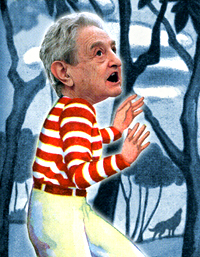 Investor George Soros as the boy who cried “wolf” one time too often. Source of Soros caricature: online version of the WSJ article quoted and cited below.

I have mixed feelings about George Soros. He likes Karl Popper, and I like Karl Popper. He donated a bunch of money to help worthy scholars in Eastern Europe, and financed a conference in Romania on private philanthropy, at which I gave a presentation.
On the other hand, he has also given a bunch of money to politicians who oppose economic freedom. And I think the high level of government regulation he favors would greatly reduce innovation.

(p. B2) WSJ: Are you getting recognition from heavyweights in academia or policy making?
Mr. Soros: It has certainly not penetrated academia, and not policy makers either. There was an article in The Wall Street Journal about people doing research on bubbles at Princeton, so I’m going to meet with one of them. I wish I could engage in a discussion with [the Federal Reserve]. I’m waiting for a phone call. I’m [meeting with] Alan Greenspan.
WSJ: But you are quite critical of Greenspan.
Mr. Soros: Greenspan is one of the great manipulators of financial markets. I mean it in a good way. He managed [in 2001] to forestall a more serious recession. He kept interest rates [low] too long. And he did not heed the warnings that lending standards were being lowered, that deceptive practices were being used. He was too much of a market fundamentalist. He believed that if you leave it to markets, everything will be all right. That’s initially self-reinforcing, but eventually self-defeating.
WSJ: Greenspan argues that the benefits of innovation are worth the occasional bubble.
Mr. Soros: This is, of course, [Joseph] Schumpeter’s creative destruction idea. However … going overboard in generating change is not necessarily a good thing. Financial innovation may not be an unmixed blessing because it really prevents proper regulation.
If you look at the 19th century, you had creative destruction going on, one financial crisis after another. But each time you had a crisis, you had an examination of what went wrong, and you put in some instrument or some institution to prevent it from happening.
I’m not advocating … central planning because that’s worse than markets. But the regulators need to learn from the mistakes that they have made. I think it’s pretty clear that you’ve got to accept responsibility for moderating asset bubbles. … That involves regulating credit as well as [interest rates].

For the full story, see:
GREG IP. “Soros, the Man Who Cries Wolf, Now Is Warning of a ‘Superbubble’.” The Wall Street Journal (Sat., June 21, 2008): B1-B2.
(Note: brackets and ellipses in original.)
(Note: I am grateful to Jamie McDonald for calling this article to my attention.)