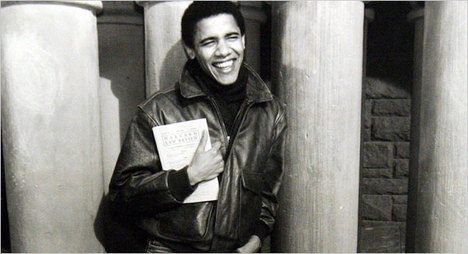 “Barack Obama at Harvard, where he was the first black president of The Harvard Law Review.” Source of caption and photo: online version of the NYT article quoted and cited below.

(p. 1) Mr. Obama, a Democrat, has continued to support race-based affirmative action, calling it “absolutely necessary” when he was a state senator in Illinois and criticizing the Supreme Court for curtailing it in his time in the United States Senate. But in his presidential campaign, he has unsettled some black supporters by focusing increasingly on class and suggesting that poor whites should at times be given preference over more privileged blacks.

His ruminations about shifting the balance between race and class in some affirmative action programs raise the possibility that, if elected in November, he might foster a deeper national (p. 16) conversation about an issue that has been fiercely debated for decades. He declined to comment for this article.
“We have to think about affirmative action and craft it in such a way where some of our children who are advantaged aren’t getting more favorable treatment than a poor white kid who has struggled more,” Mr. Obama said last week in a question-and-answer session at a convention of minority journalists in Chicago.
During a presidential debate in April, Mr. Obama said his two daughters, Malia, 10, and Sasha, 7, “who have had a pretty good deal” in life, should not benefit from affirmative action when they apply to college, particularly if they were competing for admission with poor white students.
. . .
Ward Connerly, a crusader against affirmative action, said he believed that Mr. Obama’s remarks would buoy support for his ballot initiatives in Arizona, Colorado and Nebraska in November that would ban preferential treatment on the basis of race, ethnicity and sex in government hiring and public education.
Last week, Mr. Obama’s Republican rival, Senator John McCain, announced his support for those measures. . . .
Mr. Obama opposes the ballot initiatives, saying they would derail efforts to break down barriers for women and members of minorities. But Mr. Connerly said Mr. Obama had already helped the cause. “He’s advanced the debate,” Mr. Connerly said. “He’s brought it to a new level.”
. . .
A federal judge once asked a friend of Mr. Obama’s whether he had been “elected on the merits” as law review president, Mr. Obama told The Journal of Blacks in Higher Education in 2001. He said the question came up again when he applied for a job as a professor at the University of Chicago Law School.
Mr. Obama has not described how he felt then. But as a state senator, he spoke with empathy about accomplished minority students at elite universities who sometimes lived “under a cloud they could not erase.”
Over the past few years, Mr. Obama has also voiced sympathy for whites who feel resentful of race-based affirmative action and questioned how long such programs need to continue.
Even as he argued that timetables for minority hiring may be necessary where there is evidence of systemic discrimination, he also warned in his second book, “The Audacity of Hope,” that “white guilt has largely exhausted itself in America.”
It was 2006 then, and Mr. Obama was a wealthy senator considering a bid for the presidency. He worried that race-based preferences, while necessary, might undermine efforts at building cross-racial coalitions.
Presaging his recent focus on class, Mr. Obama argued that whites were more likely to join blacks in supporting programs that were not racially based.
“An emphasis on universal, as opposed to race-specific programs isn’t just good policy,” Mr. Obama said in his book. “It’s good politics.”

For the full story, see:
RACHEL L. SWARNS. “Obama’s Path on Preferences, Race and Class .” The New York Times, Section 1 (Sun., August 3, 2008): 1 & 16.
(Note: ellipses added.)
(Note: the online version has minor differences with the print version; the online version is quoted here, except for the article title. The online article title was: “If Elected … Delicate Obama Path on Class and Race Preferences.” The ellipisis in the online title was in the original.)