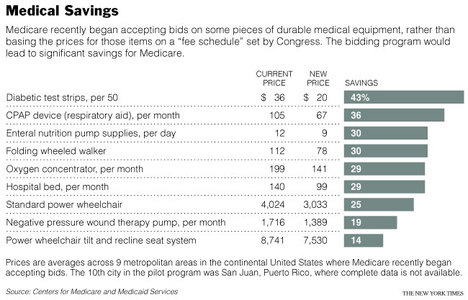 Source of table: online version of the NYT article quoted and cited below.

(p. C1) On Wal-Mart’s Web site, you can buy a walker for $59.92. It is called the Carex Explorer, and it’s a typical walker: a few feet high, with four metal poles extending to the ground. The Explorer is one of the walkers covered by Medicare.
But Medicare and its beneficiaries aren’t paying $59.92 for the Explorer or any similar walker. In fact, they’re not paying anything close to it. They are paying about $110.
. . .
(p. C5) In the abstract, fixing the health care system sounds perfectly unobjectionable: it’s about reducing costs (and then being able to cover the uninsured) by getting rid of inefficiency and waste. In reality, though, almost every bit of waste benefits someone.
Doctors who perform spinal fusion surgeries, despite decidedly mixed evidence that they’re effective, are making a nice living. Hospitals that order $1,000 diagnostic tests, even when a cheaper one would work just as well, are helping their bottom line. Medical equipment makers selling walkers for $110, while Wal-Mart sells them for $60, are fattening their profits.
The current fight to protect those profits is a microcosm of what you can expect to see if a larger effort to rein in health costs ever gets going. The defenders of the status quo won’t say that they are protecting themselves. Instead, they’ll use the same arguments that the medical equipment makers are using — that a change will destroy jobs, bankrupt small businesses and, above all, harm patients.
. . .
But this is a case in which the market can clearly do a better job than a government-mandated fee schedule. Just look at Wal-Mart’s Web site or, for that matter, the bids that Medicare has already received.
By standing in the way of this competition, Congress is really standing up for higher health care costs.