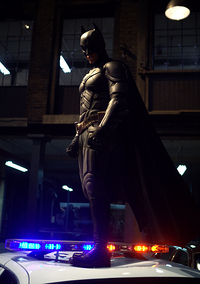 (p. A15) A cry for help goes out from a city beleaguered by violence and fear: A beam of light flashed into the night sky, the dark symbol of a bat projected onto the surface of the racing clouds . . .
Oh, wait a minute. That’s not a bat, actually. In fact, when you trace the outline with your finger, it looks kind of like . . . a “W.”
There seems to me no question that the Batman film “The Dark Knight,” currently breaking every box office record in history, is at some level a paean of praise to the fortitude and moral courage that has been shown by George W. Bush in this time of terror and war. Like W, Batman is vilified and despised for confronting terrorists in the only terms they understand. Like W, Batman sometimes has to push the boundaries of civil rights to deal with an emergency, certain that he will re-establish those boundaries when the emergency is past.
And like W, Batman understands that there is no moral equivalence between a free society — in which people sometimes make the wrong choices — and a criminal sect bent on destruction. The former must be cherished even in its moments of folly; the latter must be hounded to the gates of Hell.