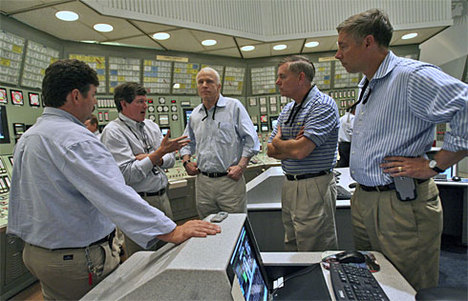 I believe that the market is the most efficient institution for deciding the best mix of technologies for providing energy. But I am ‘pro-nuclear’ in the sense that the government should reduce past regulatory barriers, that have unjustifiably increased the cost of nuclear power relative to other energy technologies.

(p. A16) NEWPORT, Mich. — Senator John McCain toured a nuclear power plant in Michigan on Tuesday to highlight his support for the construction of 45 new nuclear power generators by 2030, a position that he said distinguished him from his Democratic rival, Senator Barack Obama.

Mr. McCain, an Arizona Republican, portrayed his support of nuclear energy as part of an “all-of-the-above approach” to addressing the nation’s energy needs at a time of $4-a-gallon gasoline. He called it “safe, efficient, inexpensive and obviously a vital ingredient in the future of the economy of our nation and in our mission to eliminate over time our dependence on foreign oil.”
“If we really want to enable new technologies tomorrow like plug-in electric cars, we need electricity to plug into,” he said in a statement after touring the Fermi 2 nuclear plant, its twin cooling towers spewing vapors used as a backdrop. “We need to do all this and more.”
. . .
But market conditions have improved as demand for power has risen and the price of natural gas, a competing fuel, has jumped. Lately some environmental groups that had been critical of nuclear power have embraced it, seeing the technology as a way to meet the nation’s growing energy demands without contributing more heat-trapping gases.
In addressing the nation’s energy demands, Mr. Obama has focused on alternative energy sources like wind and solar, as well as conservation, which would apparently also be the main beneficiaries of the decade-long $150 billion government investment effort he promises if elected. He barely mentions nuclear power, usually just alluding to it in a sentence here or there.