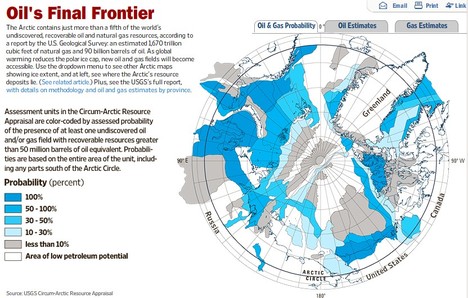 Source of the graphic: online version of the WSJ article quoted and cited below.

(p. A9) The Arctic contains just over a fifth of the world’s undiscovered, recoverable oil and natural-gas resources, according to a review released Wednesday, confirming its potential as the final frontier for energy exploration.

A report by the U.S. Geological Survey found that the area north of the Arctic Circle has an estimated 1,670 trillion cubic feet of natural gas — nearly two-thirds the proved gas reserves of the entire Middle East — and 90 billion barrels of oil.
The report, the culmination of four years of study, is one of the most ambitious attempts to assess the Arctic’s petroleum potential. One of its main findings is that natural gas is three times as abundant as oil in the Arctic, and most of that gas is concentrated in Russia.
The survey reflects interest in an area once off-limits to oil exploration. It has become more accessible as global warming reduces the polar icecap, opening valuable new shipping routes, oil fields and mineral deposits. 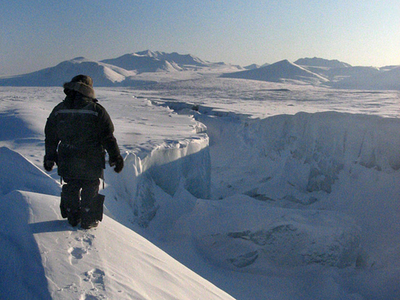 “A Canadian ranger looks along the length of one of the gaping new cracks in the large Ward Hunt Ice Shelf, in an April photo. Climate change is opening up the region’s potential for energy exploration.” Source of the caption and photo: online version of the WSJ article quoted and cited above.