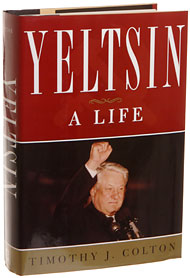 (p. E1) Yeltsin’s grievance against the Communists began before he was born, in an all-too-common history of family heartbreak that Mr. Colton pieces together with a good deal of original reporting. The Yeltsins were dispossessed for the bourgeois crime of having built a farm, mill and blacksmithing business. Yeltsin’s grandfather died a broken man. His father was charged with the catch-all crime of “anti-Soviet agitation and propaganda” for grousing at his job on a construction site, and sent to a forced-labor camp for three years.

When Yeltsin joined the Communist Party, it was not out of devotion to the professed ideals but because a party card was a requirement for promotion to chief engineer in the construction industry. And when he moved into the hierarchy, he was already a man who chafed at party orthodoxy. No radical, he “nibbled at the edges of what was admissible,” Mr. Colton writes, pushing for market prices in the local farm bazaars, encouraging entrepreneurial initiative in the workplace, complaining that the top-down system smothered self-reliance.

(p. 222) For Yeltsin’s contemporaries, deliverance from Marxist scripture and Soviet srtuctures took many forms. For him, it was an ease with the market and recoil against the overbearing state. Mikhail Fridman, who became one of Russia’s first billionaires as a banker and oilman, makes the point well:

Yeltsin as an individual who had inner freedom . . . instinctively moved toward the market as the end. That is because . . . as my namesake Milton Friedman says, “Capitalism is freedom.” . . . [Yeltsin thought] it was necessary to give people freedom and they would make out well. How exactly to do that he did not know. [But he did know] that it was necessary to free people from control: We were squeezing them dry. He thought that if we let them go they could move heaven and earth. . . . This is the level on which he thought about it. . . . He took a dim view of all these [Soviet] controls. [He felt that] the controllers had long since believed in nothing.

Source:
Colton, Timothy J. Yeltsin: A Life. New York: Basic Books, 2008.
(Note: ellipses and bracked words in Fridman (sic) quote were made by Colton; other ellipses were added by me.)
(Note: the quote from p. 525 is from endnote number 38.)