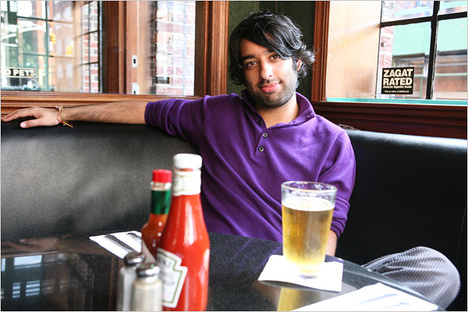 “Amit Chatwani, writer of Leveragedsellout.com and a book, “Damn It Feels Good to Be a Banker.”” Source of caption and photo: online version of the NYT article quoted and cited below.

(p. A28) Happy hour in the financial district has its own taxonomy. The other night amid the several sidewalk tables on Stone Street, Amit Chatwani, the 26-year-old behind the satirical Wall Street blog Leveragedsellout.com, broke down the scene within seconds of his arrival.

The young woman carrying a canvas “deal bag” with the Goldman Sachs logo was most likely a bank associate, he surmised. The younger-looking man reading the so-counterintuitive-it’s-intuitive business book “The Black Swan” was an analyst with big-picture dreams. And the rest of the tables were filled with tech-support and human-resources staff, he figured.
“They have to be back-office, because it’s too early for bankers to be out,” Mr. Chatwani said. “They could be traders, I suppose. Or compliance and risk management, which is basically middle-office that’s treated as back-office.”
But Mr. Chatwani would be the first to admit that his assessments of the culture of Wall Street are not, at the moment, holding their value. His book, written under the name Leveraged Sell-Out and entitled “Damn It Feels Good to Be a Banker,” was published by Hyperion in August, giving it a fair claim to some kind of Worst Timing Ever Award.

The reference for The Black Swan book mentioned above, is:
Taleb, Nassim Nicholas. The Black Swan: The Impact of the Highly Improbable. New York: Random House, 2007.