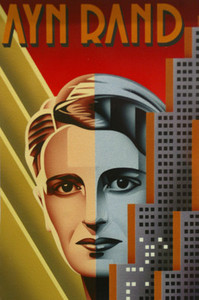 “The art for a 1999 postage stamp.” Source of image: online version of the WSJ article quoted and cited below.

(p. W11) Many of us who know Rand’s work have noticed that with each passing week, and with each successive bailout plan and economic-stimulus scheme out of Washington, our current politicians are committing the very acts of economic lunacy that “Atlas Shrugged” parodied in 1957, when this 1,000-page novel was first published and became an instant hit.
Rand, who had come to America from Soviet Russia with striking insights into totalitarianism and the destructiveness of socialism, was already a celebrity. The left, naturally, hated her. But as recently as 1991, a survey by the Library of Congress and the Book of the Month Club found that readers rated “Atlas” as the second-most influential book in their lives, behind only the Bible.
For the uninitiated, the moral of the story is simply this: Politicians invariably respond to crises — that in most cases they themselves created — by spawning new government programs, laws and regulations. These, in turn, generate more havoc and poverty, which inspires the politicians to create more programs . . . and the downward spiral repeats itself until the productive sectors of the economy collapse under the collective weight of taxes and other burdens imposed in the name of fairness, equality and do-goodism.
. . .
Ultimately, “Atlas Shrugged” is a celebration of the entrepreneur, the risk taker and the cultivator of wealth through human intellect. Critics dismissed the novel as simple-minded, and even some of Rand’s political admirers complained that she lacked compassion. Yet one pertinent warning resounds throughout the book: When profits and wealth and creativity are denigrated in society, they start to disappear — leaving everyone the poorer.