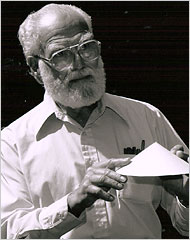 “Arthur Kantrowitz, the “father” of laser propulsion, with a cone-shaped model in 1989, first suggested the use of ground based lasers to launch vehicles into orbit.” Source of the caption and photo: the online version of the somewhat different December 9th version of the obituary at http://www.nytimes.com/2008/12/09/science/09kantrowitz.html?scp=1&sq=Kantrowitz&st=cse

(p. B13) Arthur R. Kantrowitz, a physicist and engineer whose research on the behavior of superhot gases and fluid dynamics led to nose cones for rockets, heart-assist pumps and the idea of nuclear fusion in magnetic bottles, among many other things, died in Manhattan on Nov. 29. He was 95.
. . .
After receiving bachelor’s and master’s degrees in physics from Columbia in 1936, he went to work for the National Advisory Committee for Aeronautics, or NACA, the precursor to NASA, at Langley Field in Virginia. It was there, in 1938, that he and Eastman N. Jacobs, his boss, did an experiment that might have changed the world, had they succeeded.
The idea was to harness the energy source that powers the sun, the thermonuclear fusion of hydrogen into helium, by heating hydrogen with radio waves while squeezing the gas with a magnetic field. At the time, nobody had tried to produce a fusion reaction; the Manhattan Project and other attempts to create nuclear fission were still in their infancy.
Knowing that their superiors would disapprove of anything as outlandish as atomic energy, they labeled their machine the Diffusion Inhibitor, and worked on it only at night. The experiment failed, and before the experimenters could figure out why, their director found out about the project and canceled it. Physicists unaware of the Langley experiment later reinvented the idea of thermonuclear fusion in a magnetic bottle, and they are still trying to make it work.
”It was a heartbreaking experience,” Dr. Kantrowitz recalled. ”I had just built a whole future around this; I wanted to make it a career.”